Head, Valve, and Rocker:
current development/R&D
ORIGINAL ALUMINUM HEAD (in our announcement section)
JR, SR, X-FLO (Bruce aka Gramps)
RACE ONLY ALUMINUM HEAD(NO WATER PASSAGES) if you have over $10k I'm sure he would make another
(best quality link assistance)

The heads are based on NEW thicker EFI style castings.

The combustion chambers are unshrouded to 73 cc using CNC machining.
Because of the thicker casting both the intake and exhaust have hard valve seats installed rather than just the exhaust.
The valves are stainless steel 4.910" long 1.94" intake and 1.60" exhaust.
The head comes assembled with valves springs suitable for most hydraulic cams.
If you need a different spring for a different application it can be substituted for the difference in spring cost.
The rocker towers are standard height for stock pedestal mount rocker arms or the Scorpion roller rocker arms.
If you want the towers machined, drilled and tapped for 7/16" rocker studs it can be done as an option.

Use a 9/16-18 set screw to plug the smog pump air holes that lead into the exhaust port.

View attachment 5397
The big valve, CNC ported head is not on their website.
This thread is serving as the advertisement for the performance Promaxx head for the Ford 300 six.
You need to call Promaxx and order through Jason.
Click to expand...

can be contacted by email at jason@promaxxperformance.com
Click to expand...

NO LONGER AVAILABLE:
2 types of a limited experimental run of cross-flow heads by ford in research and development (never available to consumers or placed in the production of any vehicle or application) 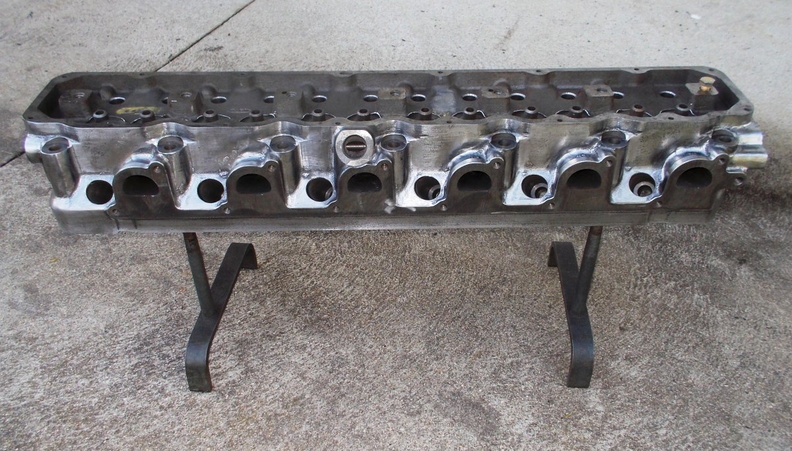 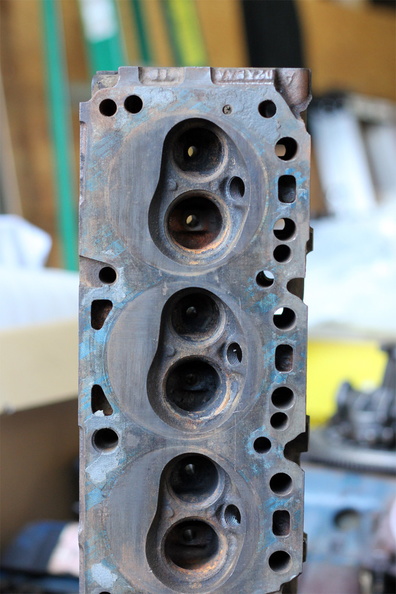 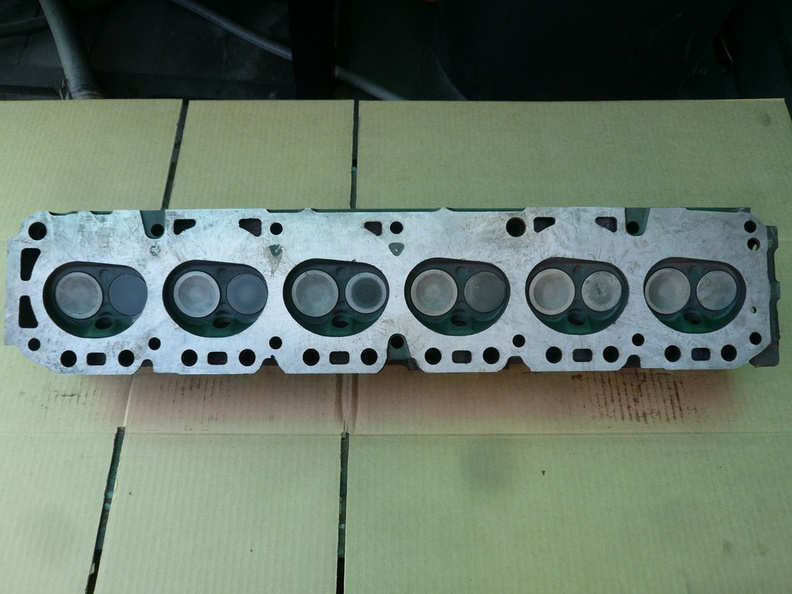 1987 and later heads have a 68cc kidney or heart shaped combustion chamber. These are the EFI heads

The EFI heads have an extra three bolt holes to support the exhaust manifolds.
prior to 87 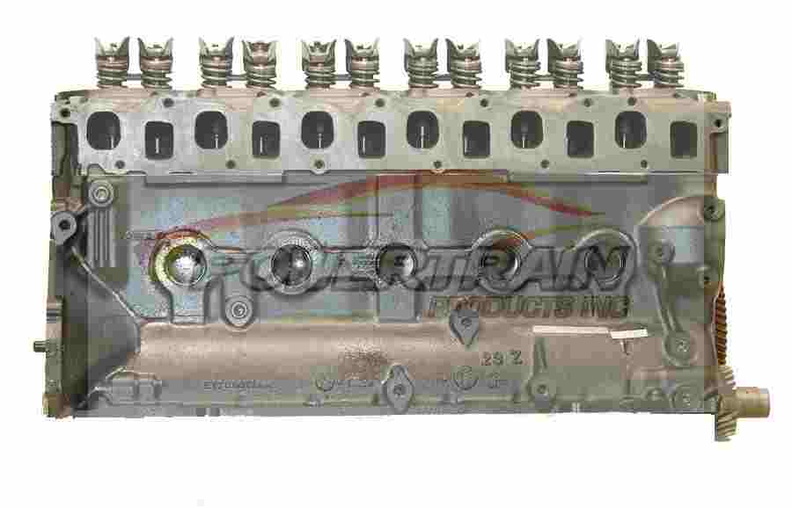 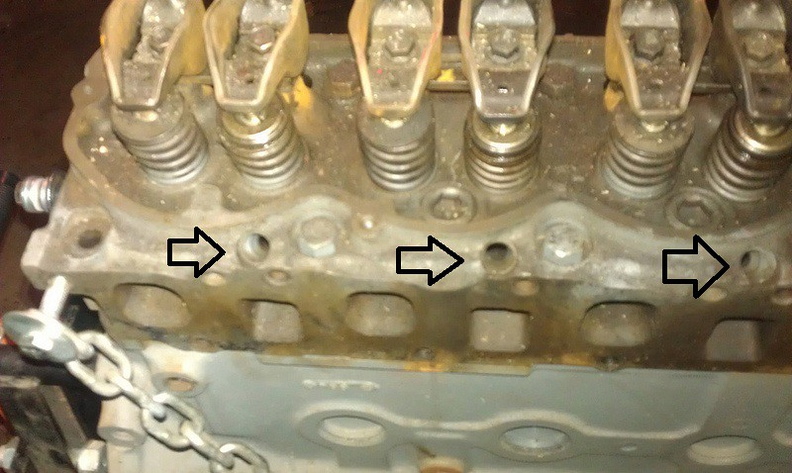 Heads up to 1984 have stud mount rocker arms with slot shaped pushrod holes in the head to act as pushrod guides.
Up to 1977 (unconfirmed) the 3/8" rocker studs used a 3/8 x 24 self locking adjusting nut.
The 1978 to 1984 heads use a shouldered 3/8 positive stop rocker stud with a 5/16" x 24 nut with no adjustment. The nut is torqued to the stud shoulder.(image assistance appreciated)

If the head is converted to screw-in rocker studs then the SBC 4.910” long valve can be used for oversize valve installation as well as the SI 4.810" long Ford 300 1.94"/1.60" valves.
The 1985 and later heads will need pushrod guide plates when converting from pedestal to stud mount rocker arms.
oval pushrod guide holes 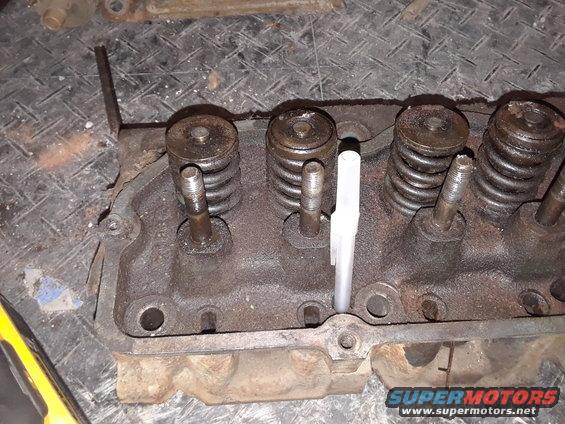 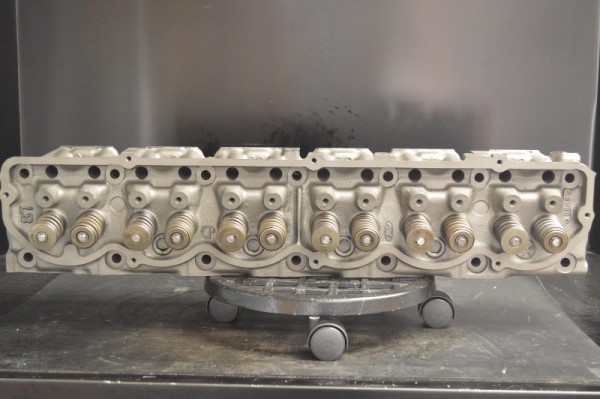 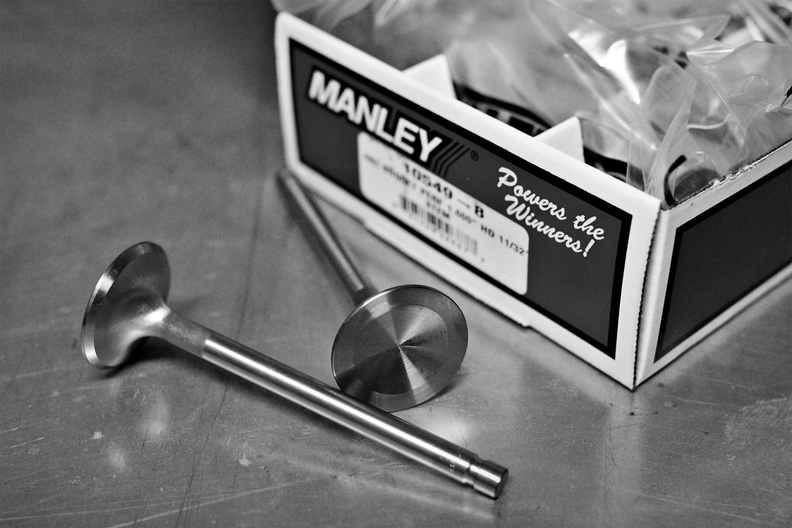 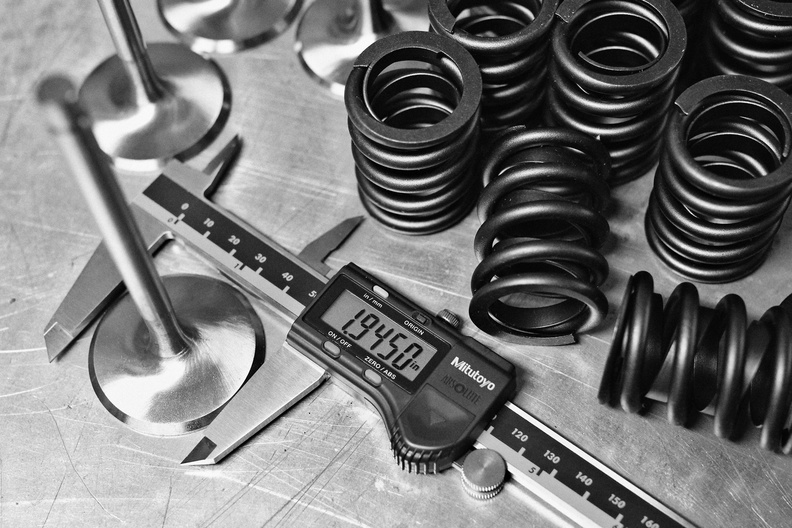 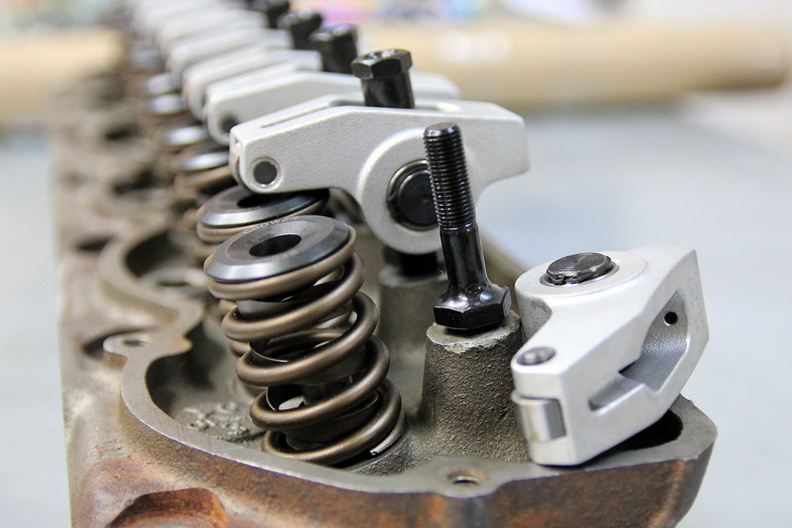 Additional Note: The 1985 and later heads with the short 4.750" valves will have valve retainer to valve guide clearance issues with valve lifts near .500".
Will need to use longer valves either the 4.810" or longer depending on the valve lift.

Note on roller lifters: some machining may be required to install lifters with link bars


For valve lifts at .500" and above it is recommended to use roller rocker arms.
i have seen comp cams roller tip rockers used before not sure of technical specs or results part #1431-8 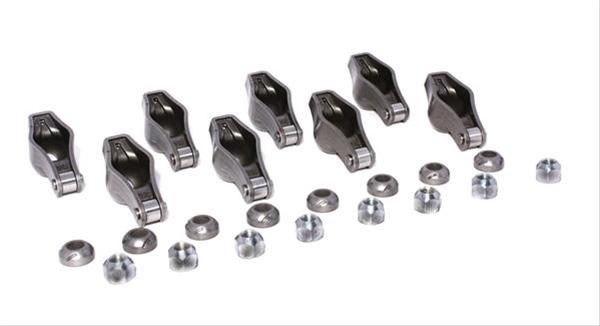 Scorpion 1059 roller rockers fit the 1985 and later pedestal mount heads. They are a 1.73 ratio rocker arm. 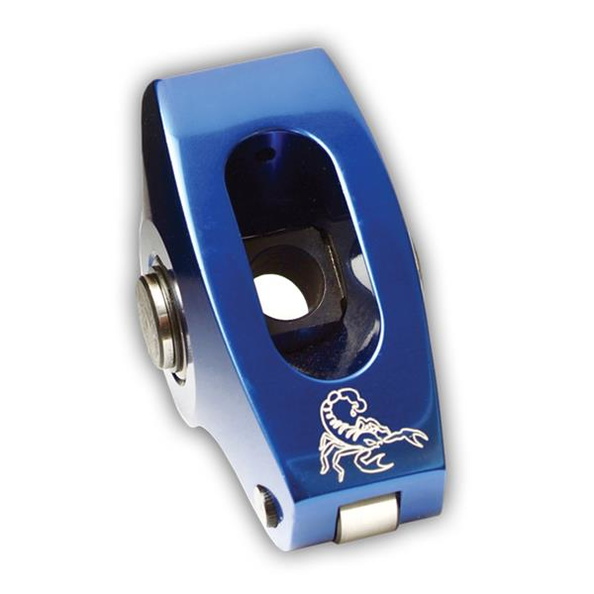 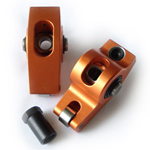 There was some thought about moving the rocker studs out to 1.650" but the BBC rockers have an acute angle with the pushrod if you raise them to the proper height on the stud and the angle becomes more acute with pushrod lift.
The reason for this problem is the 240/300 six valve stems and pushrods are parallel unlike the V8 engines where the pushrods approach the rockers at an angle.
The Harlands are straight across from the bottom of the roller tip to the center of the pivot point. 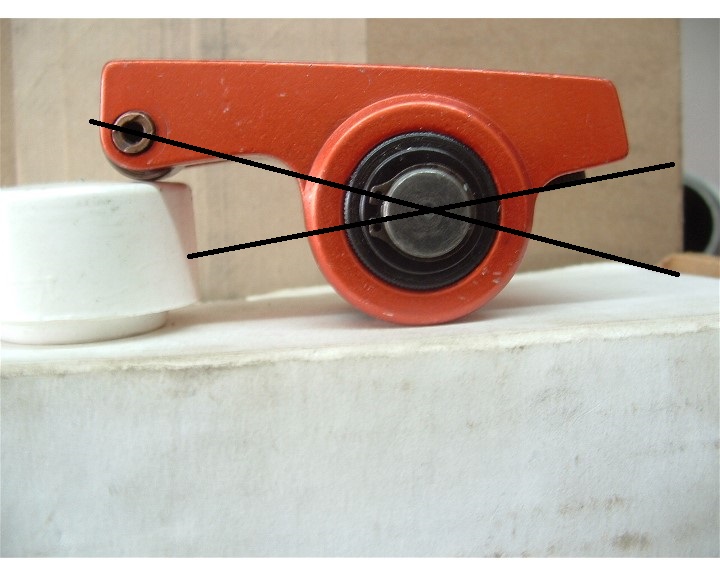 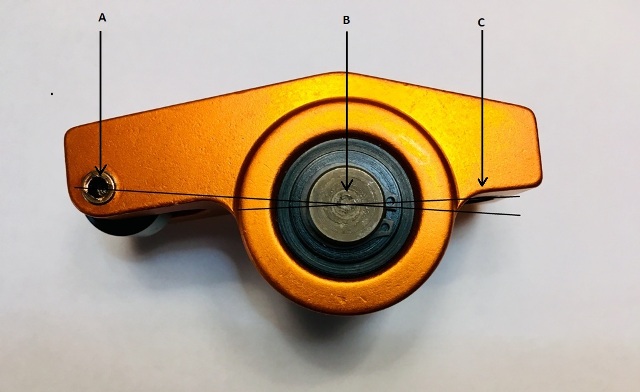 Staff member
VIP
Supporter 2021
Supporter 2019
REDLINE 10K
With the 240 heads smaller combustion cambers when it's swapped onto a 300 short block it will raise the compression ratio around .4 to .5 to 1. Good luck

I bought the oversize valves from SI last year for my 85 head. I'll see what info I can dig up.

There was just one odd head that was not mentioned: Some 1982 300 heads had ridges in the combustion chambers. No one to this point has been able to explain why or in which models the ridges were found.

That crossflow head was never put into production.

In anything.
It was an experimental prototype.

altered the wording to avoid confusion I was aware that it never left the R&D facility in any application and i also mentioned that there were two versions created if I'm not mistaken I think i recall you were the one to share that information in another thread
you currently possess one cross-flow head correct? and the other version would be even more difficult to find if at all
I'm curious as to how many of both were actually made and where they would be currently
could build a registry list for posterity and if any manufacturer wanted to recreate one they would have access to them
G

F-250 Restorer":2diu95j5 said:
There was just one odd head that was not mentioned: Some 1982 300 heads had ridges in the combustion chambers. No one to this point has been able to explain why or in which models the ridges were found.

Looks like a normal chamber to me. I don't see any ridges.
P

I recently bought a Flatout gasket for my int/exh manifolds. Its thinner than the remflex, but doesnt squish like the RF either. And it came packaged much better, so I didnt get 2 damaged ones before I finally got a good one, as I did with the RF.

VIP
BigBlue94, can you post the number for the intake/exhaust gasket from Flatout Gaskets so we have both the head gasket & int/ex numbers for future reference.
M

Would these rockers work? Has anyone used them? Maybe add to list? Also I noticed it doesn't say size anywhere up there just that pedestal but not 5/16....could be useful

VIP
Supporter 2018
Supporter 2021
Both those rocker arms are for the Small Block Ford and are too short.
The fulcrum length is unique to the Ford 4.9 six at 1.60"
Only the Scorpion 1059 rockers are designed to fit the Ford 4.9

old28racer":qtjslmwh said:
BigBlue94, can you post the number for the intake/exhaust gasket from Flatout Gaskets so we have both the head gasket & int/ex numbers for future reference.
Click to expand...

I'll add that the port sizes match up perfectly with my 85 head. The gasket is physically larger than the remflex, having more material on the outside perimeter. I had issues with the remflex not having enough meat around the ports. In fact, I burnt one part out from it not sealing against my header flange. I ended up welding a couple beads around that specific port and grinding them flat to the flange.

I was not very impressed with the remflex for that reason. I suppose with a log or efi manifolds ot would have been a bit better. Once I got it sealed up though, I had no leaks.

Supporter 2021
Hello all, I need some advice. I have a '65 F-100. It has the faithful 240 in it. I recently put a pair of cast iron headers on it. What a big difference just doing that has made! I am wondering if I were to have the head ported & polished if that would be worth the expense?
I am so impressed with the motor's performance now...would I notice much difference with the p&p and the larger valves?
The head has 89,000 miles on it. Three cylinders need valve guides replaced. (oil on plugs). Since I want a valve job...
Want to keep the stock rocker arms/pressed studs. Just want the motor to breath.
Thank you for your knowledge/experience. Pete
You must log in or register to reply here.
Share:
Facebook Twitter Reddit Pinterest Tumblr Email Share Link
Top