Not sure I mentioned it but I got a Braille AGM compact battery, looks like a lawnmower battery :roll: hooked it up with a 250 AMP circuit breaker. (You can see it is right behind where the rear seat would go if I was installing one, there will be an access panel on the inside of the car there)

Here is pretty much all the engine wiring the only other wires to be added will be A/C stuff later. 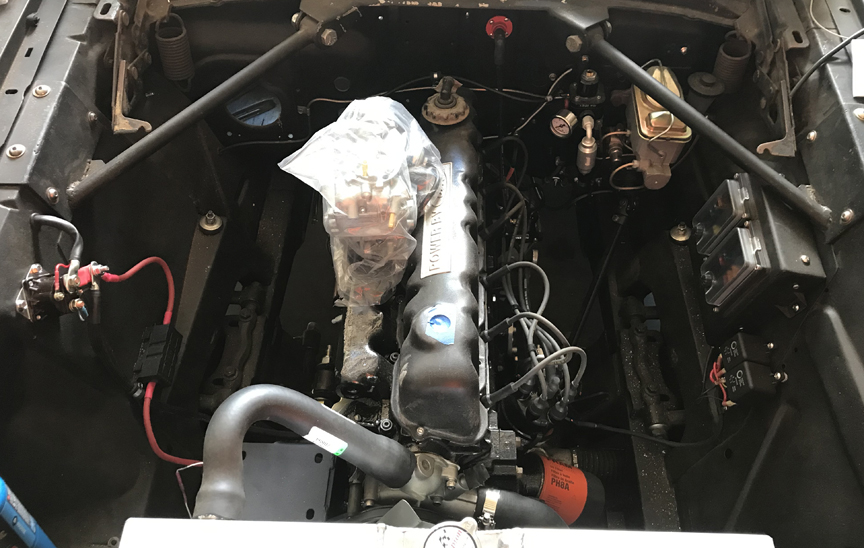 My biggest mistake I have found so far is totally messing up wiring the relays in the trunk (fuel pump and compressor) after blowing a few fuses on the compressor I got them sorted and wired correctly, my brain must have been broke the day I wired those :roll: I guess I wired the first one wrong and followed suit with the second one

Hopefully, I will be well practiced by the time I finish all the wiring on this car.

Mike :wow: that's a lot of wring going on with cool LEDs in the panels, all that detailing really looks great!

You keep on doing a great job, really impressive.

I continue to look forward to your updates.

Thanks I try to make things neat and unusual I enjoy the work just wish all the parts were free.

I have been wiring other stuff as I wait for the last few parts to fire up the car, I got the turn signal switch back in and some of it hooked up, I actually made lights blink at the rear of the car but need to get some new sockets for the taillights, probably the front marker lights as well all of that stuff has gotten a little crusty over the last 56 years.

I am trying to add sequential taillights but the little cheap boxes I bought won't let the brake lights work right (they sequentially blink once and then go off) Speedway has one for around $50 so I think I will order it, it controls the brake lights as well and I can't get them to work set up according to the wiring diagram except for when the turn signal is activated, the new control boxes get a signal directly from the brake switch and bypass the turn signal switch.

Not too exciting stuff but all necessary, eventually :roll:

I will keep you guys posted.

Made the headlights light up today (3 out of 4, one is burned out) Just about finished running all the wires for exterior lighting.

Final engine parts came today so I will be shifting back over to the motor for a bit.

Just to finish up mostly done things before switching back over to engine work I got the truck headlight switch installed and the new dimmer switch, all the turn signal wiring is done, horn wiring is done.

The headlight switch was not a fully bolt in mod, the detents on the new switch are further back (see middle picture below) there are at least two solutions to this problem, getting a longer headlight knob or moving the switch slightly forward, I chose the latter.

I had to cut the rear part of the bracket off that holds the switch and move it forward around 1/2" and rewelding it in place, I also had to cut off about the same amount from the bezel tube threads and liner.

I tend to set myself goals as I build, I guess it gives me some sense of accomplishment, at one time I determined I would do the build in phases, as of today I reached the end of Phase1, which had a goal of the Comet running and driving I have achieved that

The main thing not done yet, that I know everyone wants to see, is the custom intake and triple two-barrel carb install, that is still going to happen but in Phase2, so stay tuned for that.

Phase2 will mostly involve getting the car street legal, finishing the wiring, and installing the A/C system, bodywork and paint are two things included along with the interior. Phase2 is a little more open-ended than Phase1 and I guess i will decide when it is finished and if there will be a Phase3.

Supporter 2018
Impressive work! I dig it!

I made another video, this one is really long and took all night to upload, my camera work and audio is not perfect by any means I guess I need more practice. What you will see in this video is more details on the Comet than I have ever shown.

There is a little info on what Phase2 will involve.

Staff member
VIP
Supporter 2021
Supporter 2019
REDLINE 10K
Thanks Mike, for making the video showing all the Comets details and parts choices for it!

bubba22349":25lhcnxd said:
Thanks Mike, for making the video showing all the Comets details and parts choices for it!

I hope it helps folks in at least a small way when you start really looking at and listing off all the stuff that has been done to the car 2 years doesn't seem like all that long, almost nothing went on the car that I didn't seem to modify in some way and then doing it all myself (except the machine work) there are a bunch of hours tied up pretty quickly, the only bad thing is if anything falls apart I won't have anyone else to blame.

If I had a nice climate-controlled shop (with lights even) and a nice collection of tools I might never come out :roll:

I do want to say having so many knowledgeable folks that are willing to take the time out and give advice is a super big help.

I just got through watching the video. Everything you have done looks great. You are doing a terrific job.

Soldmy66":1omgdakn said:
I just got through watching the video. Everything you have done looks great. You are doing a terrific job.
Click to expand...

Thanks, wish I had done a better job on the video but I am still around to clarify anything anyone has questions on.

I made a video of the 2-speed/intermittent wiper update on the cheap for my '64 Comet, it was a little over $100 in parts (I had some of them already) but you can do it cheaper by going and pulling your own parts at the junkyard instead paying someone on eBay to do it for you :roll:

Forgive my poor video making abilities I will keep trying to improve them.

Nearly finished with my homemade wiring harness, I have to replace a few things, mainly the turn signal switch is sketchy, I went out last night after dark to check my lights and noticed the third brake light on the package tray had about 3 or 4 LEDs lit on the right side and power is not even hooked up to the brake circuit so there is bleed coming through someplace and the only component common is the turn signal switch, I have a new switch on the way.

The cheap LED headlight bulbs are proving why they were cheap and I only have 3 working, I have new bulbs on the way for them as well, may need to look into some different tail light bulbs too that don't strobe but of the three different kinds of bulbs I bought they were the only ones that did not bleed over to the opposite side while flashing (again may be related to turn signal switch, but tested and don't think so) All the taillights came from Wish and were super cheap I may try to buy just two better ones and see if they are affected the same way.

Made a video showing everything about the wiring and lights.

See Ya,
Mike
B

VIP
Supporter 2021
Great video and outstanding accomplishment.
Although I worry that CCP state security apparatus is dissecting this video and appropriating all your technology now.

bmbm40":187by8kg said:
Great video and outstanding accomplishment.
Although I worry that CCP state security apparatus is dissecting this video and appropriating all your technology now.
Click to expand...

Thanks, I don't know if they will learn much but I probably stole some of my ideas from someone else, at least in part

Friday I got the brake light switch installed and discovered I am getting too old to lay on the floor of the car all twisted up :roll: I remember laying on my shoulders, lower half draped up over the seat and legs hanging over the seatback while working under the dash, now I have to take the seat out, pad the floor and still complain to myself about how I hate doing it while I try and avoid Charley horses in my legs at the worse possible moments, maybe why it takes me a bit to start some projects :roll: There is also that "while I am here" thing that happens.

Ran the wire for the backup lights but can't fully install until I put the rear bumper back on, they work however just sort of dangling from the back of the car

Got the new LED headlights installed but broke one of the bases on one of the new bulbs so I have one mismatched bulb in there, I ordered another pair so I guess I will have some spares, the cheap plastic base makes me a bit concerned to the longevity of the bulbs. They are really bright, however.

Hopefully I am doing well-balanced updates to the controls of the Comet as I go, the LEDs (though they have been a little headache) are bright and a little easier on the electrical system, I now have 2-speed wipers with an intermittent function instead of a single-speed, back-up lights where I had none, etc. I still want the car to feel original in a sense, and it does except the more responsive steering and better brakes are noticeable, can't say for the T5 yet, I haven't really had an opportunity to try it out.

Attempted to do an at-home front alignment on the Comet yesterday and either I don't know how to use the little Speedway gauge (likely) or I messed up installing the upper control arm mounts on the M2 install.

I guess I will take to a professional to try and do an alignment, if they can't I have plans to do a modification to the upper mount eliminating the t-bolts.

Loaded up and headed to the muffler shop tomorrow morning for them to just look at it and tell me if they can make the pipes to attach the header to the exhaust pipes.

Little nervous loading it because I was afraid of high centering it, but I raised it all the way up and nothing touched, there is no lack of power to pull up on there I let all the air out and strapped it down.

Spent the day making sure there was nothing loose on the car or anything that might want to blow out as I pull it down the highway.