THE FRENCHTOWN FLYER":39pk6kx5 said:
I misplaced the contact info for the gear sets. i'll hunt it up.
Click to expand...

The gear maker has not responded to my queries. Does anybody have Mike's current contact info?
Click to expand...

I'd still like to contact the maker of these straight-cut infinitely variable timing gears. His screen name was "mikenson". Does that ring a bell with any of the older forum members? 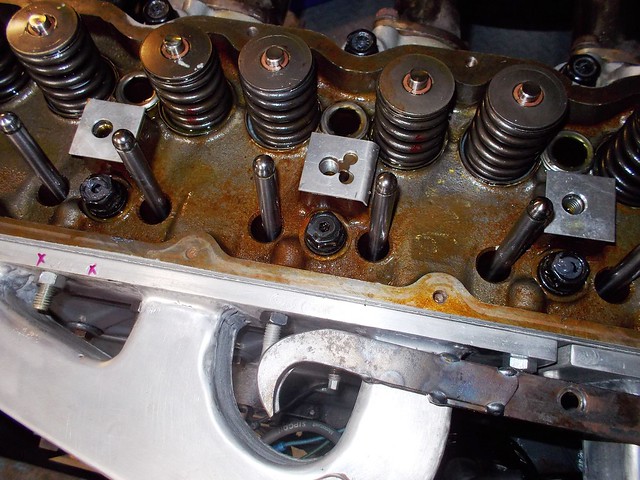 I also read up on the SU carbs and now have a pretty good idea how to rebuild / calibrate / tune them.

VIP
Sounds good! Can't wait to hear it with a more aggressive cam.

Glad the lazy #4 cylinder was an easy fix...Whenever I hear one cylinder bleeding off while cranking, my peril-sensitive sunglasses go opaque...

VIP
Supporter 2021
Supporter 2020
Supporter 2018
That's what tipped me off to something amiss too mechrick. Once it fired it ran on all six, but I could tell one cylinder was amiss.
I once had an Escape with a tulipped valve that did the same thing too.

THE FRENCHTOWN FLYER":2py40lva said:
I wish I had a more agressive hydraulic cam available. With non-adjustable rockers none of my solid or roller cams will work.
Click to expand...

Pick a couple long duration, low lift lobe profiles from here
http://www.bulletcams.com/Masters/Hlobes.htm
You will want either a CTA or CTS lobe type profile.

VIP
Supporter 2021
Supporter 2020
Supporter 2018
Well,I've always liked the Crane cam in my Willys that is near to their H270/318. With 1.76 intake rockers it pulls good past 5500.
But what I'd really like to do is trade off a couple of solid lifter cams I have - one new, one gently used - for a hydraulic grind to keep my investment in this mule motor as low as possible.
M

THE FRENCHTOWN FLYER":6obapet8 said:
That's what tipped me off to something amiss too mechrick. Once it fired it ran on all six, but I could tell one cylinder was amiss.
I once had an Escape with a tulipped valve that did the same thing too.

If it’s not too aggressive of a lobe , you can use a hyd roller lifter on a solid roller cam. 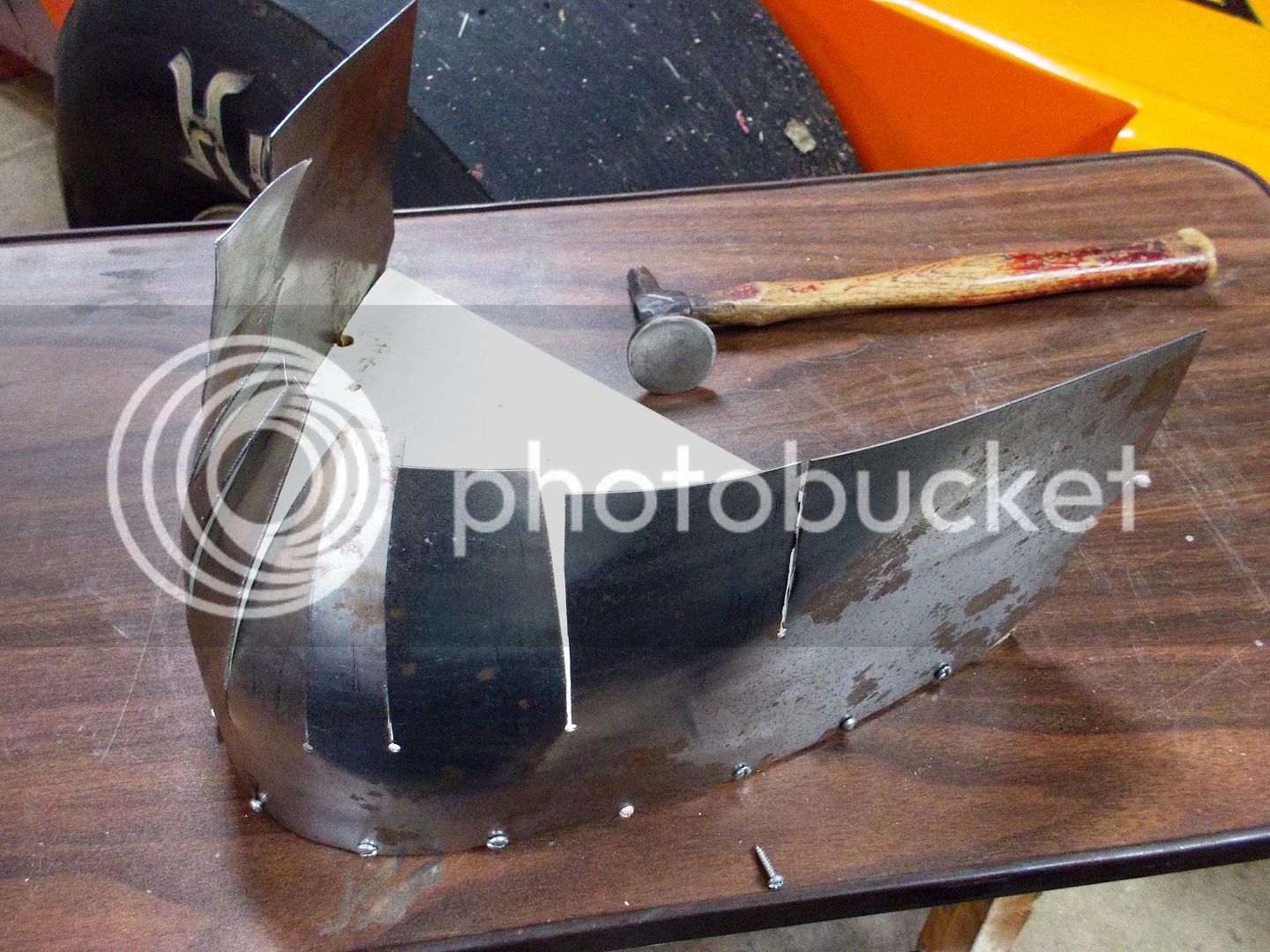 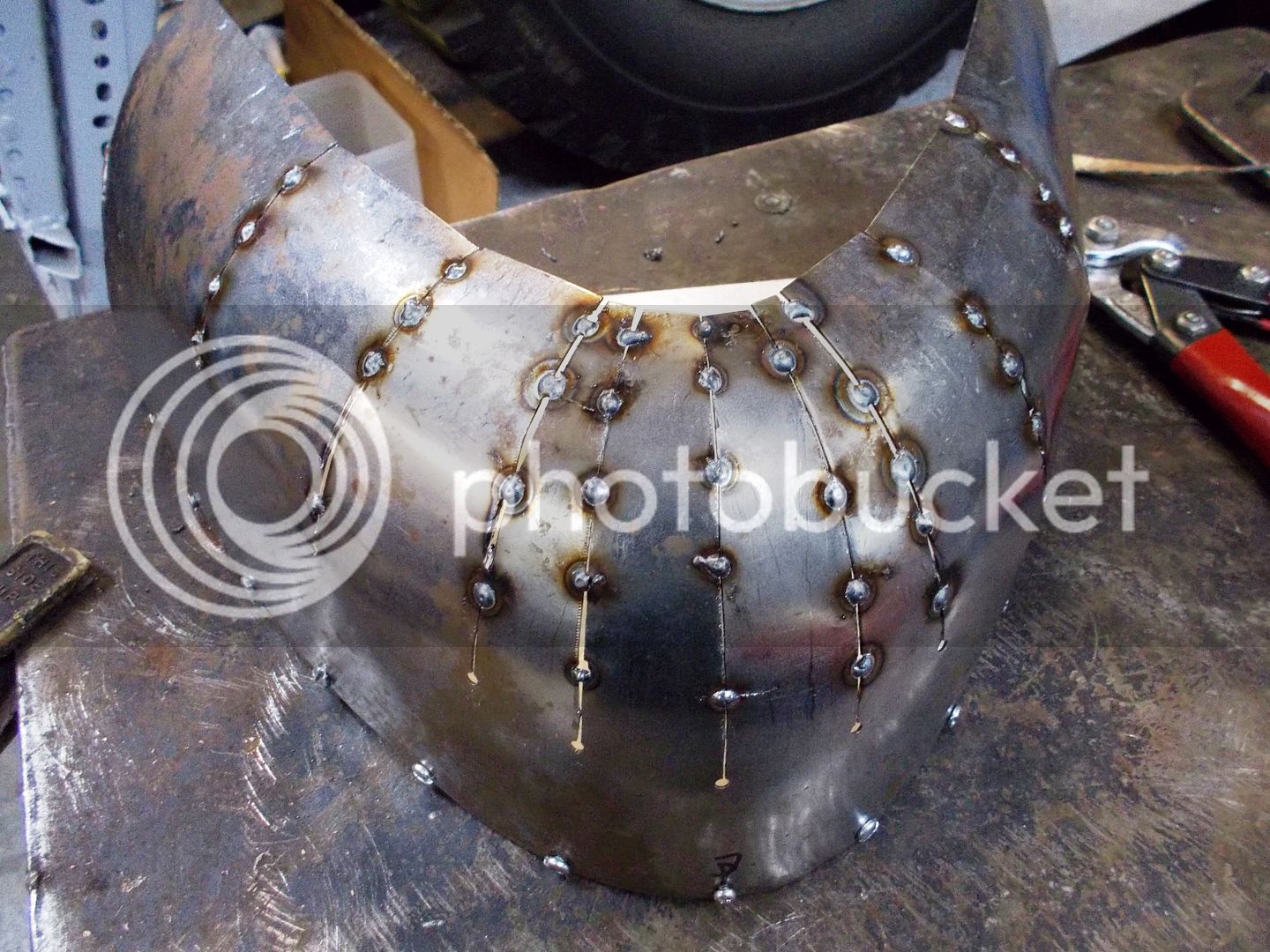 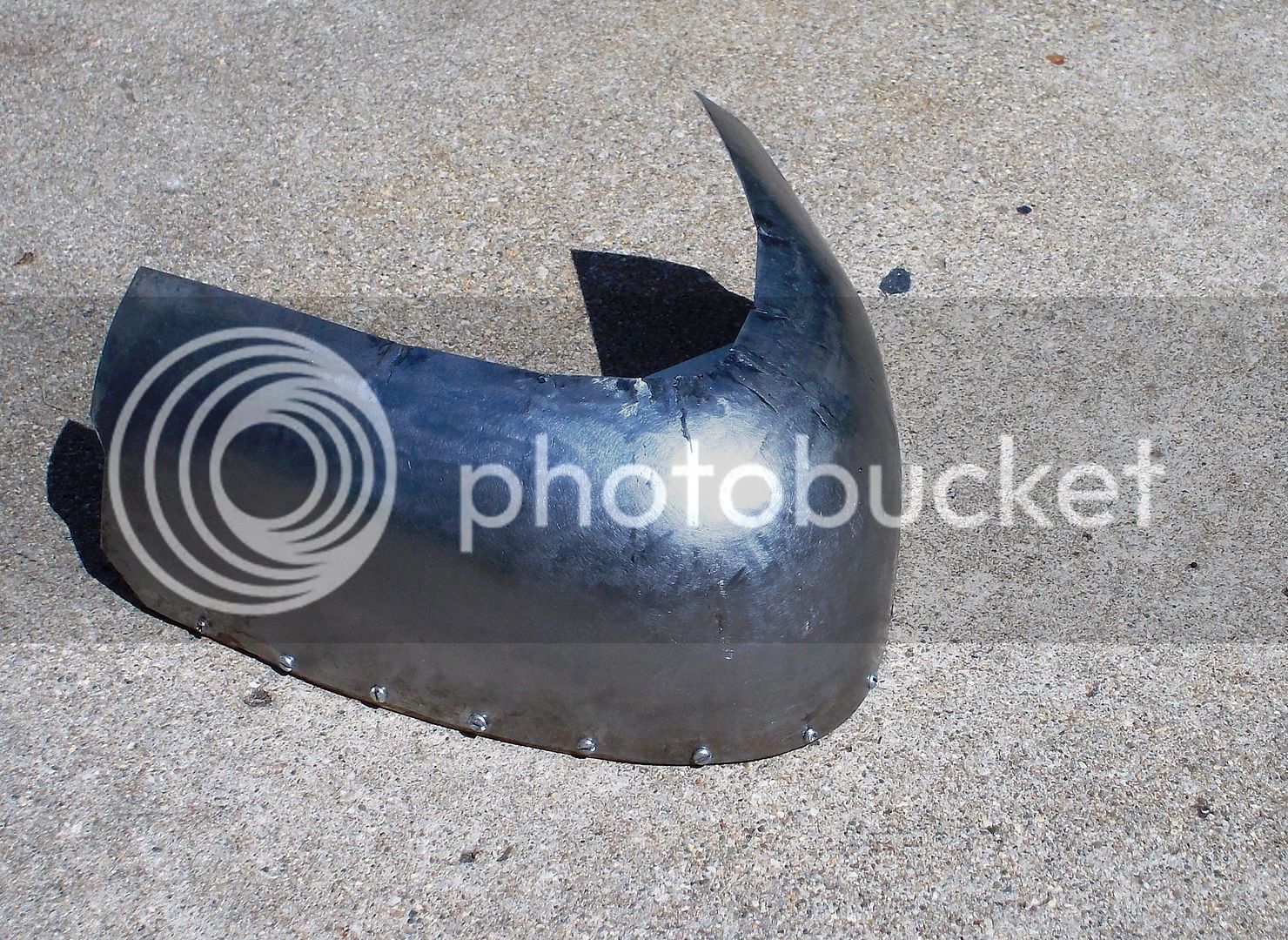 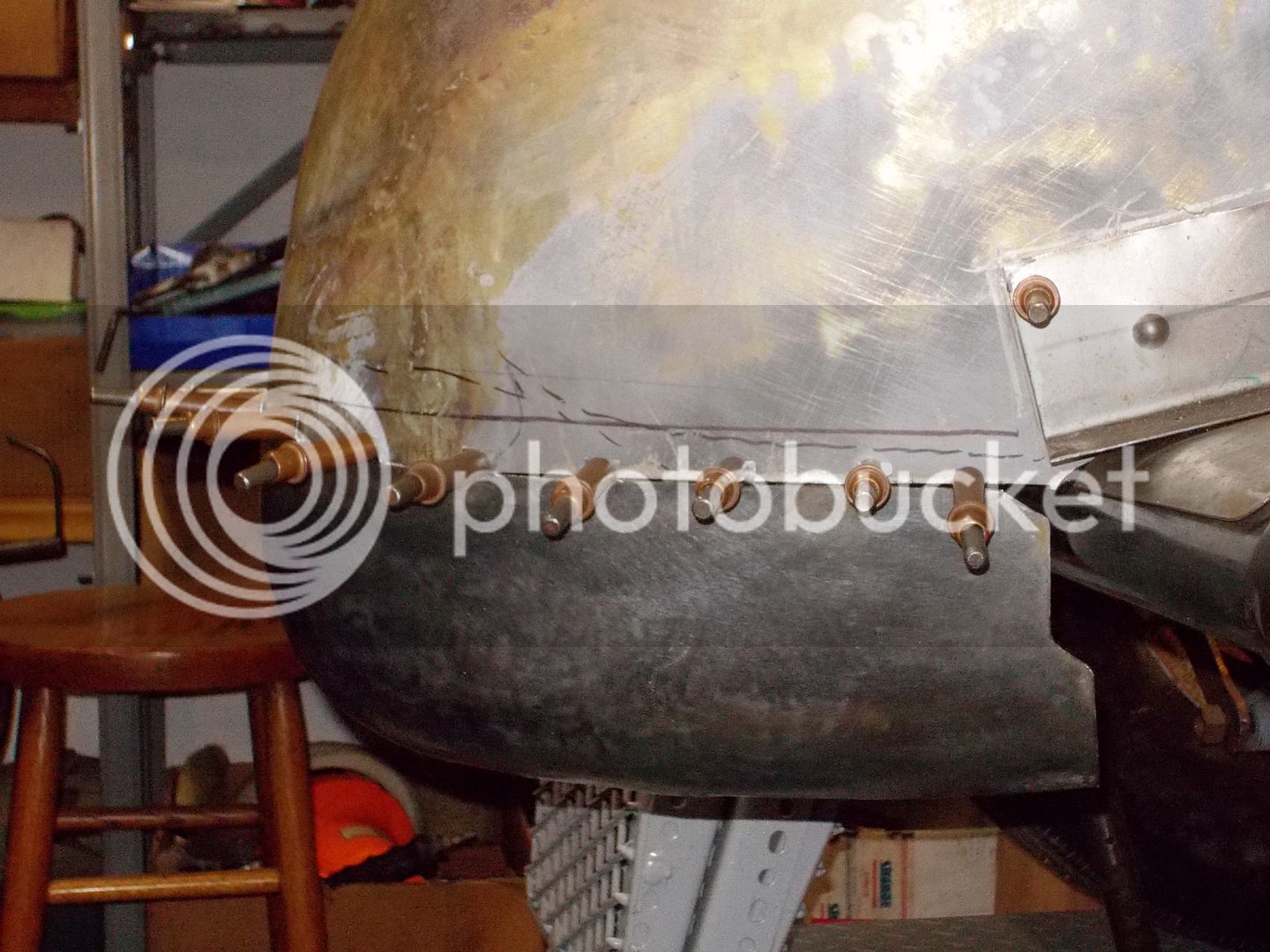 Lots of rain lately means I have time to spend in the shop making pieces like this lower rear tail section.
1

Supporter 2021
Man that looks fun. I've wanted to build a replica of the old SCCA chaperal (spelling?) with the wing.

As my wife and I were returning to our neighborhood from a bike ride a '53 Ford panel delivery truck passed us, stopped several hundred yards ahead, and turned back to meet us. It turns out to be a fellow retiree I hadn't seen in a long time who recognized me. We went back to my house for a closer look at his truck (223 inline powered!). When he saw the champ car he said he was the guy who worked in the Engine Build area at Ford on the crossflow six program. He was pleased to see one being put to work.
1

When he saw the champ car he said he was the guy who worked in the Engine Build area at Ford on the crossflow six program. He was pleased to see one being put to work.

Is there any chance he could be prodded to share any details he might have in memory? That would be wonderful!

VIP
Supporter 2021
Supporter 2020
Supporter 2018
I plan to ask him when I see him again. We discussed mutual friends who were on the program. Since he was an engine build-up techie he was not involved with any of the policy or design decisions directly.

VIP
Supporter 2021
Supporter 2020
Supporter 2018
Progress report:
I have been working on the rear of the car. It is essentially complete with the build of the harness restraint, the roll bar assembly, the exhaust pipe support and some more body work. Aside from shock mounts and maybe an anti-roll bar I can now move froward. 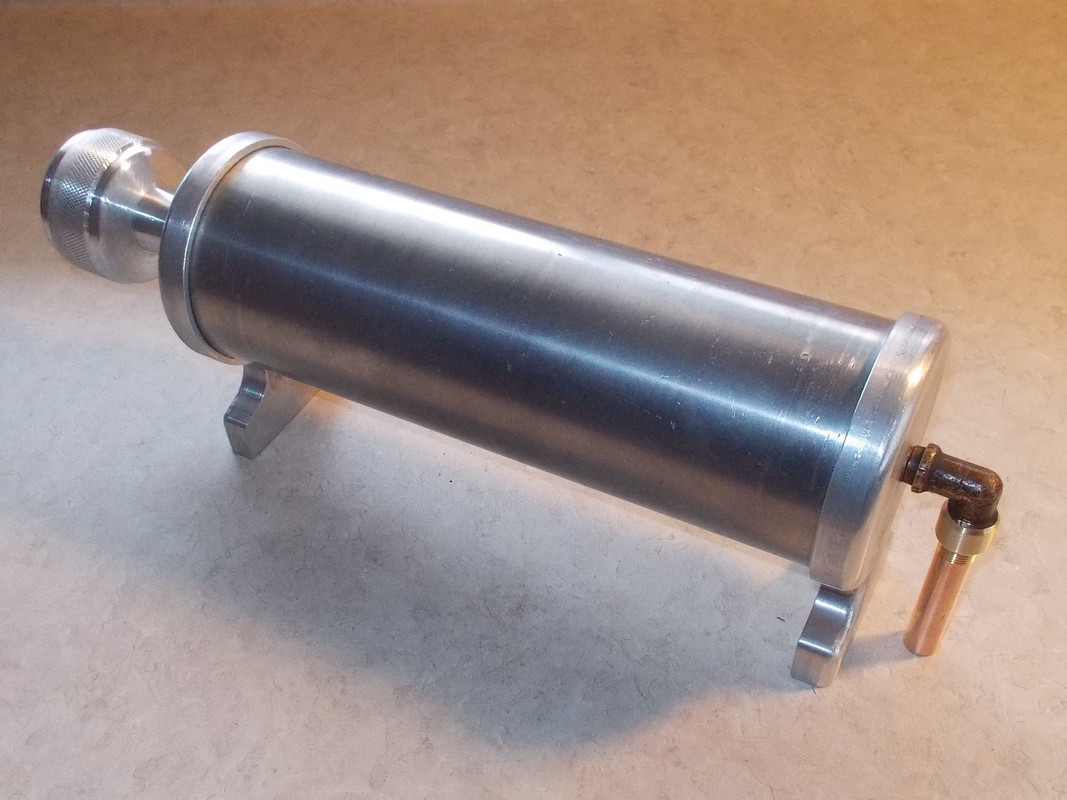 VIP
Supporter 2021
Supporter 2020
Supporter 2018
Recent work: Installed a '64 Mustang radiator to keep this beast cool, and a 5-gallon fuel tank to keep it fed. And roll bars and safety restraints to keep the driver (me) bump free. It's really fortunate living in the Detroit area and being a ford lover, running into old engineers or pretty much anyone who worked there even on the lines... Nice work, FTF where are you going to be dirt racing? And I noticed on the first page you posted what looks like valves in a power drill angled against a bench grinder. As someone who's come from very little I've inherited most of my tools and they are old, I've had to teach myself how to use stuff and am just starting to get into head work after finally progressing in my mechanic skills the last few years.

This is a cracked head I've been practicing on...(ignore the flash rust lol, unexpected rain that turned out a way to highlight my work) anyway I was curious if I could do my own valve job in a similiar way and am pretty happy I saw those pictures. I was thinking of buying the cutting stones to also do the seats, do you have a solution for that also? I removed my first valves just last week so I'm not too familiar with what I'm doing, going to use old valves as practice... At this point I almost don't even like asking for advice, it's almost fun trying to figure out how to do stuff without it... From the few videos I've seen I need to use an oil bath, which is something I wouldn't have thought to do though... Anyway I'll figure it out just good to know it's possible. The head work pictures was just me trying to get a feel for the deburing stones and metal deburrers not actually so much else, I have only a couple hours on a Dremel tool. But after doing alot of suspension, rear end rebuild including pulling and pressing the bearings and headgasket last year I'm ready for the next steps.

VIP
Supporter 2021
Supporter 2020
Supporter 2018
Hi Mydogisshaggy. It is commendable that you are willing to tackle the build up of a Ford six head. Porting and polishing the ports and chambers is a good way to get more power from the engine. Even the novice builder with basic tools can improve things a lot.
What looks to you like a drill holding a valve against a grinding wheel is actually a Sioux valve grinding machine. Do NOT try to grind the valves in an electric drill. The valve grinding machine is a very precision machine that will precisely restore the surfaces on the valve. Some processes are better left to pros with the right equipment. I bet if you took just your valves to an automotive machine shop the cost to just grind your valves would not be much.
Likewise grinding the seats requires very precise control of the grind stones, with frequent precise dressing. Leave that to somebody with a seat grinder. The valve guides often need reconditioning before seat grinding can be done.
Good luck with your project.
There are a couple of groups in NW Ohio that race vintage cars. Also, I have been invited by ARCA to bring the car to their old-timers weekend at Toledo and Flat Rock Speedways. We'll see.
Last edited: Jul 18, 2021
You must log in or register to reply here.
Share:
Facebook Twitter Reddit Pinterest Tumblr Email Share Link
Top