I have swapped the old 144 for a 1978 200ci which came with a Hays ignition box with wiring, most wiring is straight forward as shown in photo and just plugs into the distributor, the two I'm not sure about are the two left shown in photo, they look like they where connected to the coil from the shape layout. At the moment I have just connected the standard ignition wire from the car back to the coil as before but I'm not sure if this is correct and if I need to run it differently now from coil backwards with a resistor of some sort
Last edited by Phil wells on Sat Mar 28, 2020 1:07 pm, edited 1 time in total.

I haven't placed a post asking for helpful guidance on how to wire up a Hays ignition to my knowledge before !!

I'm not familiar with the hayes box but this DS2 diagram along with a hayes diagram should get you going in the right direction. What distributor is in the car? Good luck. 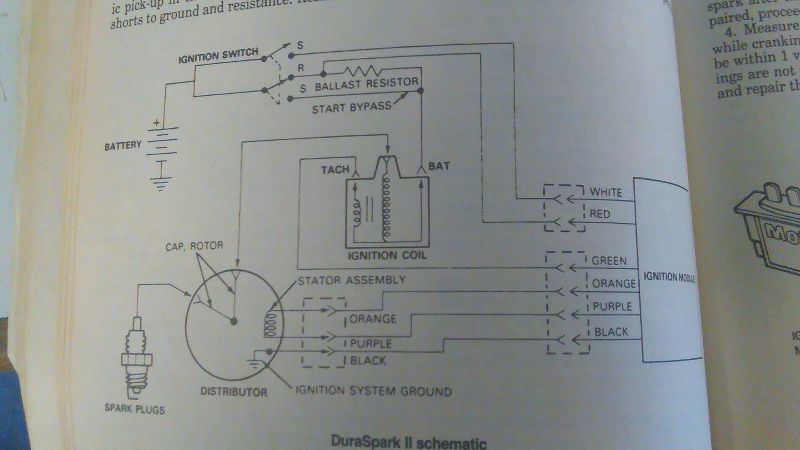 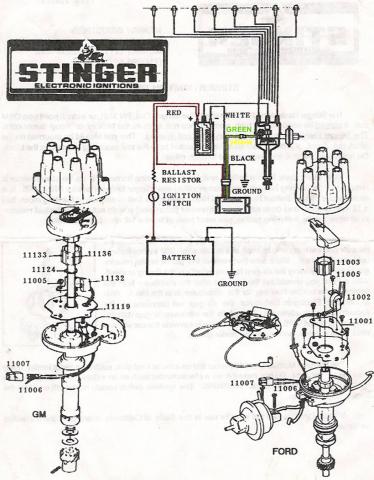 It looks like they are powering the module with the ballast resistor wire unlike a DSII or HEI system. Looks pretty straightforward. If it doesn't work as shown reverse the pick-up leads.
It ain't gonna fix itself

Hi Phil welcome back, looks like you been working on and making good progress on your 1978 200 swap. X2 Econoline all ready posted you a couple of good wiring diagrams on the stock wiring for a DuraSpark II and the Hayes ICM. The Hayes Electronic Ignistion Control (ICM) wires hookup kind of like the a DuraSpark II Yet it's even simpler and since your engine was running in the Mustang before you bought it this should only take a hooking up the two wires to get it up and running.

1. The Ignition Control Module (ICM) gets mounted to the inter fender panel or even inside the cab on the back side of the firewall (less heat) if the wiring is long enough. The Hayes ICM harness goes into its Distribor wire socket. Some people will run an extra ground wire to one of the mounting screws of the ICM but if the inter fender panel or firewall is made metal and has has clean metal it's probably not nessiary as long as you are getting a good ground. It certainly won't hurt though to have an extra ground wire since these old cars often don't have good grounding due to rust, dirt and paint.

2. I think your 1960 may have a ballist resistor mounted on the firewall I don't remember on these old early Falcons or you may have a Pink wire with a resistor built into the wire coming from the ignistion switch . Once you determine that I will mod this responce some more. However which ever type or if you have the Pink Restor wire such as the mid 1960's Falcons did this is how I do them. You can use all of this stock orginal Wiring hooked up to the new coil used with the Hayes ICM, just like it was hooked up to the old coil that was used with your old 144 engines point type ignistion system.

3.The Hayes ICM has a 2 wire plug or has a Red and a White wire coming out of it. The Red wire is connected to the output side of side on the ballast resistor or the pink wire. This is the same as the stock DuraSpark II. The White wire is different from The DSII system. On the Hayes ICM it goes goes to the Distribitor or - side of the coil. Now your all done and can Enjoy all the benefits of the DSII electronic ignition upgrade in your 60 Falcon. Hope that helps you good luck

Great thanks guys, that's a great help. I will have a look at that tomorrow. I have plenty of time on my hands at last to get on with it now this horrid virus is locking us down, engine all cleaned up and engine back in place.

The original wire to coil comes from a plug terminal on firewall this is red with white strip, I can't see a ballast anywhere on firewall, it looks like the colour the other side of dash is pink that goes of to the switch, again I couldn't see a ballast up under the dash

Re: Hays ignition wire he

Hi Phil, yes I wasn't sure if the 1960 Falcons still had a ballast register like the late 1950's Fords used haven't worked on or had one them for quite a number of years. Ok then it's got a resistor that is built into the Pink wire under the dash and coming from the ignistion switch, Easy Peasy.

So depending on the location you are planing to mount the Hayes ICM you can connect the Hayes Red wire in several ways for a clean apearance or even a stealthy hidden look when mounted behind the firewall in the cab. These connections are direct into that terminal on the firewall for the Red / White coil wire or behind it (when it's mounted behind the firewall) spliced into the pink wire from the ignistion switch. Then that Red / White wire will conect as it originally did to the Batt (on a Ford spec coil) or + side of the coil. If the Hayes ICM gets mounted in the engine compartment, you can also just connect the Hayes Red wire at the coils Batt / + post together with the orginal Red / White wire from the firewall. In any case this Red wire is used just to supply power to the Hayes ICM. Good luck

Phil, if all else fails go with the MSD box & MSD Blaster 2 coil. MSD also makes a harness to connect the DS11 right to the MSD Box. MSD 8869 is the part #
Since the MSD runs on a full 12V you get superior performance.
A real plus is your resistor wire will trigger the MSD.
Let me know if you need a DS11 recurved for your engine combo. Bill
67 mustang,C-4, with mod. 80 hd, custom 500 cfm carb with annular boosters, hooker headers, dual exh.-X pipe, flowmaster mufflers, DSII dist. MSD-6425CL & MSD-Blaster 8252 Coil. Engine 205" .030" over with offset ground crank & 1.65 roller rockers. 9.5 comp., Isky 262 cam.
2003 Ford Lightning daily driver. Recurving Distributors. billythedistributorman@live.com

The isolation has been good, I have finally got the engine in and running today , thanks for all the helpful advice from everyone

Congrats on a job well done it's a remarkable transformation of your 1960 Falcon Ranchero.

Nice looking engine compartment! It looked like you'd been off roading in that thing in the before pic lol
It ain't gonna fix itself

Y put in anytime till U know "wassss up"?
U sure those R the same one?

ecoline, not been off rd in it, i brought it from a Ranch dispersal sale out of Kansas and had it shipped over to England, it had been sat on that ranch since 1972 . From the wear on everything including the clutch plate I suspect the original owner drove it until it would drive no more

Chad, sorry, no offence but I find it really hard to work out what you are trying to say in your replys

(Y put in anytime till U know "wassss up"?
U sure those R the same one?)

Return to “Electrical, Audio, and Electronics”

Users browsing this forum: No registered users and 3 guests