I'm trying to find information on the 'right way' to wire up a yellow strain Duraspark II ignition box.
This box would have been used in 79-81 Mustangs with the carb turbo 2.3L i4 cars.
I can find the diagrams that work for blue and red, but not yellow.

I'm working on an old school method for how to retard timing underboost.

The normal blue/red boxes have a built in 5 degrees of retard when the white wire is engergized, the yellow has another 2 degrees via the additional plug.

In the below link you will find the wiring diagrams (in PDF) first three are for the 1979, 1980, & 1981 Ford Mustang's should also cover those years of the Mercury Capri's too. Good luck on your project

http://vb.foureyedpride.com/showthread. ... 986-in-PDF
A bad day Drag Racing is still better than a good day at work!

I left out a few details.. I had looked at those diagrams already, and they are only good for NON-turbo cars.

Here's the pic for the 1980 ignition where it only shows 2 connectors, yellow strain has 3.
1980_Mustang_Wiring.jpg

Here's the rest of what I've looked at, I left it off because I thought it was getting too long.

After picking up the GM draw through turbo setup at a swap meet, I started thinking about timing control. And I figured that somewhere along the line somebody must have figured out manual timing control. And I found that Ford did.. from 1979-1981 the 2.3L turbo cars were carburated and used a 'yellow strain' Duraspark module.

Before I found the Ford info, I had already found GM 5-pin HEI info.

This shows how to wire a pressure switch to trigger the timing retard.
http://www.instructables.com/id/Dirt-ch ... ed-engine/

More digging turned up information on the Ford system, but not quite everything.
https://www.fordmuscleforums.com/all-fo ... ction.html

Based on the Ford Muscle link, I found a Wells F110 module on Amazon and ordered it.

I found a thread on FourEyedPride that shows wiring diagrams, but not the turbo ones.
http://vb.foureyedpride.com/showthread. ... 986-in-PDF
You do not have the required permissions to view the files attached to this post.

You can apply power to the white wire and watch your timing step back on any Duraspark II, Blue, Yellow or Duraspark III Brown

Yellow Strain is both Duraspark II just makes it easier to externally and additionally pull out spark advance via the Distributor Modulation Valve (DMV) or the altitude-compensating spark retard. DSIII with Brown Strain relief accesses the BMAP sensor, similar to the later TFI MAP sensor on EECIV Fords.

You can use the old white wire to do it.

Lazy JW wrote:If you are using a stock DuraSpark 2 ignition, verify that the ignition is receiving the signal to retard the ignition while cranking to start. IIRC it is the white wire that needs to have 12 volts during cranking; this retards the spark ≈ 5° for easier cranking.

Former user here, Mark P, described that the usefull Yellow Strain Duraspark Module, and the DSIII Brown has a BMAP interface to dial in or out advance, via what was the IGN pink wire. That normally whent to the Wht I wire, but there are various wiring diagrams on the web, and according to PSIG at fordmucle forum, ones called "conversion wiring" may have issues.

For example, one diagram uses the starter relay "I" terminal for just the white wire for start retard (that's OK), but powers the module from the coil wire after the resistor (not OK). That forces the module to run on fluctuating voltage averaging 6 to 9 volts.

Old convention is is

Yellow is best found used, and to track down a

(Each from the outside edge)

Newer replacements have moved away from the stock 1977-1984 Duraspark II wiring protocol, so it can be a little hard to locate a working diagram of the Duraspark II/III Yellow Strain Relief box.

The little 2.3 has a feedback Holley Weber 6500 for CA or Hi Altitude areas, or in Carb Turbo applications.

Can anyone tell me specifically what this part is?

The part looks to be never used, but stored poorly for many years. I have no use for it and thought maybe a Pace car or Cobra car some where might have a use for it.

So - I'm trying to ID it, and get it to the right person. 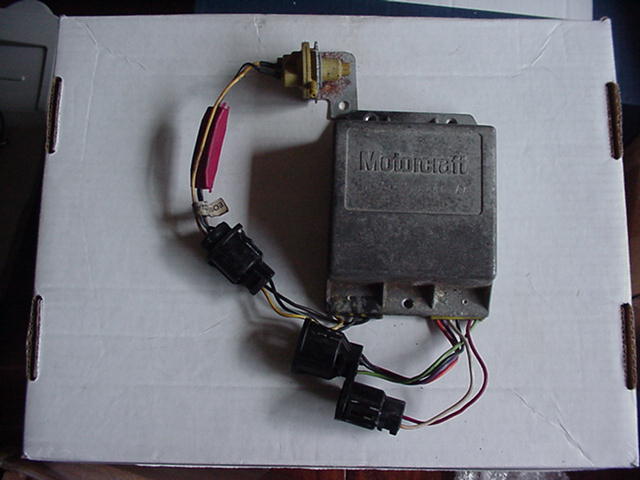 Switch setup shown modifies spark (retard?), non turbo, car/truck.
Was something like for high altitude, carb. Exact engines it was used with-??
Turbos had additional switches similar to one shown.[/QUOTE]

MCU controlls some of the system, the Duraspark II with Yellow Grommet is self correcting from the ignition on start up, then the advance under boost and DMV

You can see what shape and size the ECU connector is.

The visual guts of the yellow grommet Duraspark ii for 1980 Feedback CA model is here. 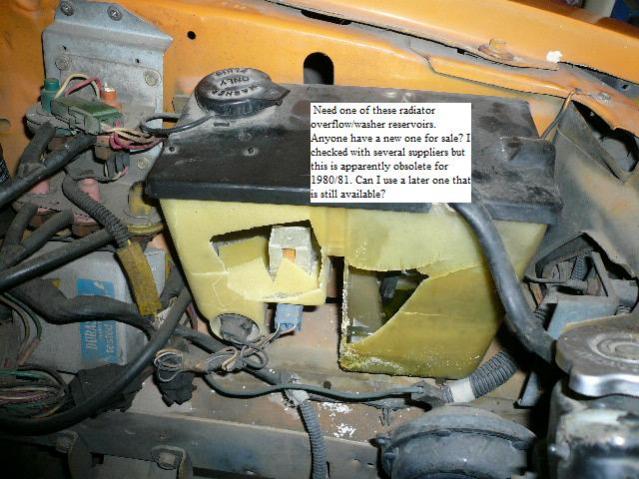 "gr79]Fooling with the waste gate hose can get 5+ easily. Mix in some racing fuel to be on the safe side.
Definite noticeable increase of power at 7#, about as high as i want to go.

On my carb 2.3T [1979], there is a check valve in that hose that affects how the gate works.
Also uses a DY 237A ignition module which retards timing in relation to manifold signal.
Has 3 harness connectors.
The turbo engine sensor array on the fender apron near the washer fluid tank does the timing map.

Noticed in the [1980 CA Mclaren ] M81 pic the item in the engine bay near there right were the array is on mine.
Ig box mounted higher?[/quote]

Although vaccuum line related, this will help some.

[quote="Meela wrote:Let me add my experience, I've had half a year of adjustments Mustang 2.3 turbo


Secondary port of wastegate can be connected to MAN PLN or let it open to Atmosphere, but not caped!
(modified)

Before 1981, the car was the EVTM and VECI diagram

Link to copy below. Almost exact routing and parts were used in Fairmont/Zepher 2.3t's.
http://myzephyrs.com/VAC_2.3/9-2E-R0.html

Decoding of most abbrev in diagram, post #13 : http://vb.foureyedpride.com/showthread.php?65173-1979-2-3-turbo-Engine-Pics-required-please!
And:
http://myzephyrs.com/vac_part_name.htm

Sellis1012 wrote:these are the two primary things you need. You might have the schematic under your hood that you'll want to butt up against this one. You need to study the schematic, then study and figure out what each piece of the puzzle is from the abbreviations. If you have a question about what a particular piece is, take a picture, post it up and I will be able to tell you what it is. I pulled out some skills from basic electronics in the Air Force and traced out all the lines with different colored pencils. So you will want to print these out. I can e-mail you the pictures and if you can put them on photoshop you can make them bigger. They are quite clear on photoshop. SHould work in Word as well. The cut off abbreviation is VVVAC-Vent Valve Vacuum.

RNR#1 and 4 are the metal vacuum lines.
MAN PLNM is your vacuum tree at the front of your engine.
SPK RET is the set of switches by your washer res.

The 2.3 Carb turbo CA or 1980 2.3 Carb Turbo MCU system brain box, I've not been able to identify it on any schematic or picture yet.

Confirming that the Yellow Strain Relief Durasaprk II module also controls the inputs from some of the five potential Solendoids; it operates from the five Null Knobs, or potentailly Six (6) sensor controlls that might present on a 2.3 Turbo carb engine.

Specifically, the 2.3 Carb Turbo is not a Feedback Carb 2.3 engine, has no Oxygen Sensor, and is not MCU.


The five structures of the six possible are:-

Yellow is a factory set Solenoid.

Again, IIRC, there is an additional possibly Red "Sol V" for A/C Throttle Kicker to add 50 rpm to the idle speed, but its seperate from the Yellow Strain Relief Duraspark SII.

Here is an M81 engine with A/C, turbo 2.3 Carb engine in Califonia emissions with the Twin Cataylst engine standard on all 1980 Turbo's. 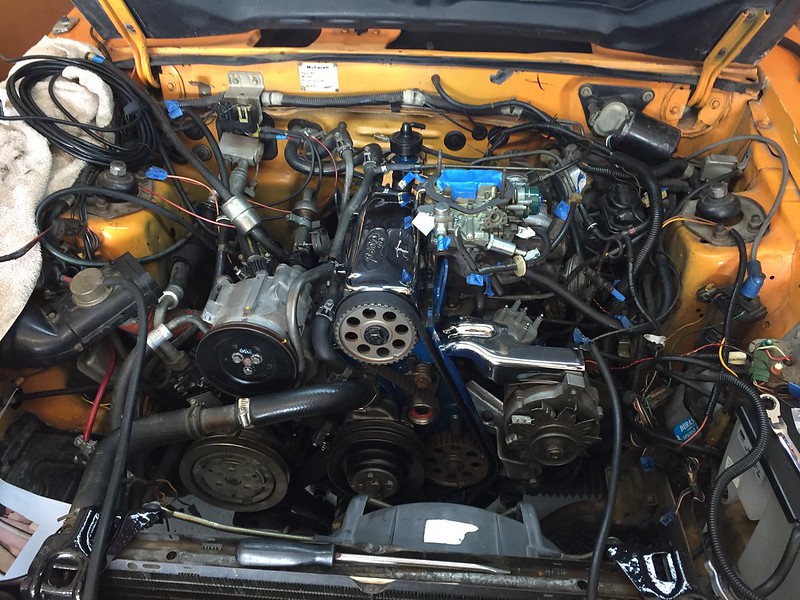 Everything is 9 or 12 reference voltage (12 volt is battery reference, so it can be as high as 14.9 volts, or as low as 9). MCU, EEC 1, II and III used the higher voltage to control inputs to the Duraspark II or III, or the MCU or EEC unit.


It was only The EECIV and later than 1984 stuff that had the 5 volt reference voltage. The early stuff is nigh on bullet proof, so your free to experiment.


So experiement with the inputs to the pin plugs, and measure your actual advance. You won't destroy an Yellow DSII.

I believe the top pair of switches are for the lights,etc,

Each pair consists of one high and one low limit switch.

Assy. is connected electrically to one plug of the 3 plug DY-237-A ignition module (yellow strain)

Very importantly, the Three Pin Plug wires have been changed after the 1979 model year; D8 and D9 color codes vary.


The module is listed as a Feedback carb option for 1980 250 YFA equiped Granada passenger cars, as well as many others, 10 pages long in fact.

Just confirming from gr79 and m81mclaren that no carb turbo 2.3 Fords were feedback, so no need for MCU to trim air fuel ratio.


So your free to experiment as discussed.

gr79 wrote:......
Module:
My 79 2.3T uses a Motorcraft DY-237-A or D9AZ-12A199C module assy.
Two yellow strain reliefs on side. One has 2 wires, one has 4.
No other connections. Two black harness connectors.
Connectors, wire codes to module:
One 2 wire (pink, white), one 4 wire (green, orange, purple, black/green stripe).
The 2 wire connects to the sensors. The 4 wire connects to the distributor.
Only other turbo boost related item under hood is the two level sensor assy on fender.
For red over boost warning light/buzzer, green TURBO light, ignition timing retard under boost.
The warning modules, buzzers, are behind ps dash.....