Hey guys, I am finishing collecting parts for my turbo setup and will be using a new 32/36 weber.

Have any of you guys been able to keep the choke operable with a blowthrough setup? I have read it must be removed, but am unclear if this is for better airflow/power thing, or some practical reason like blowing the choke closed while under boost.

I would love to hear from anyone with experience leaving the choke operable as I live in northern MI, and this will be my daily driver.\

Thanks,
Sam
My garage:

With a blow through setup the carb air horn the choke sits in restricts airflow with a carb hat.

If you can find a way to blow air in vertically so its not a restriction you could probably keep it.

Thanks for your reply. Perhaps if I were to attach a sheet metal "funnel" of some sort inside the carb hat and into the choke horn to smooth the flow this would be a step in the right direction?

Any idea what the symptoms of this kind of restriction would be?
My garage:

Bump to the top, really looking for info on this guys. If it is just a matter of a restriction can something similar to a stubstck be added to the top of the carb to smooth the flow of air through the choke horn?
My garage:

First Fox,
I don't have any experience with leaving the choke in. I've always removed them.
And even in winter, I've never needed the choke with a blow-thru setup.
Granted I live in Tucson, AZ so it only gets down to the mid-20's F during the winter. Usually not that cold.

I would think that the choke won't close under boost. Never tried it of course, but if an airfoil (choke plate) is streamline with the airflow, it would have to defeat that force to close.
One of the problems is that the choke will bleed pressure from around the shaft. No much I'm sure, but some.

Thanks for your response Will. I have read a LOT of your posts on here and respect your opinion. I will post back here and revive the post after I get her going just to let anyone else know if it is successful.

Thanks again guys!
Sam
My garage:

The carbs I have are Webers off Maserati Biturbos. That's just trivia to you except that they both have manual chokes on them and Maserati used them as blow-through carbs, not with hat but with an entire box around the carb.

So, I think that, at least with Webers, chokes are okay to have.

If it was a sucessful FACTORY blow through set up, they were choked from factory because they had to meet cold start emissions requirements for the Eurpean common market, Japan, or the US.

Same for blow throughs like Fords Mustang 2300 carb turbo (technically a failure), and ran a standard choke equiped 6520 Holley Weber feedback carb. So were the MMC/Mitsubishi/Colt draw through Solex 2-bbl carbed Mirage/Cordia and Tredia Jap Domestic market 1981-1983 1428 and 1595 cc engines. So were the 2 and 4-bbl carb variants of the F85 Olds and then the much later 1979-1982 "231" Buick 3800's and the Pontiac 301 Trans Am turbo's. "Sucess" was a relative term...any carb turbo, blow through or draw through from 1962 to 1983 was a lottery with respect to reliability, so much depended on ignition stability and what altitide, fuel and heat and stock comression ratio conditions the owner had to contend with. As soon as turbo's got Bosch injection, they were able to be tuned safely for heat and air density. To compare a 131hp carb 2.3 Turbo Mustang to 145 hp EEC4 EFI 2.3 used in 1983 Mustangs was like four generations of improvment, not just just the two calander years since the carb turbo combo was withdrawn.

The Paxton Thunderbird/Gale Banks/BroadSpeed blow through carb design was to put a box around a stock multiple barrel carb, and treat it like it was just a 60% bigger engine. 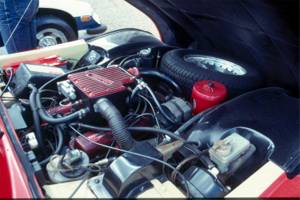 And to the original poster. If you keep the choke you will lose boost were the linkage passes thru the carb body. If you want to keep the choke put the carb in a pressure box like xctasy posted pics of above.

Thanks for the responses guys. It kind of looks like maybe the removal of the choke is largely a "I did it because that's what you are supposed to do." type of thing.

Would the small leakage past the choke rod lose enough boost to cause a problem? Couldn't this be compensated for by an increase in boost? If it were to leak 1 PSI, for instance, couldn't the boost just be increased 1 psi and you're back in business?

Wouldn't there still be problems sealing up an enclosure around the entire carb, linkage, cables etc. ? It just seems like there are that many more places for a leak compared to a carb hat.

Again, thank for the input.
My garage:

First Fox wrote:
Would the small leakage past the choke rod lose enough boost to cause a problem? Couldn't this be compensated for by an increase in boost? If it were to leak 1 PSI, for instance, couldn't the boost just be increased 1 psi and you're back in business?

Ever try to blow up a balloon with a hole in it?

With all the effort, time and cash going into mine I wouldn't want to loose any boost. Otherwise why even bother.

If you want to run a choke run one. I'm not going to on mine. And mine is going to be a year round daily driver in Minnesota.
Ted

And to the original poster. If you keep the choke you will lose boost were the linkage passes thru the carb body. If you want to keep the choke put the carb in a pressure box like xctasy posted pics of above.

Fordman75 wrote:
Ever try to blow up a balloon with a hole in it?

With all the effort, time and cash going into mine I wouldn't want to loose any boost. Otherwise why even bother.

If you want to run a choke run one. I'm not going to on mine. And mine is going to be a year round daily driver in Minnesota.

I am seeing however it as blowing up a balloon with a tiny hole in it while using a very big air compressor. Building a given amount of boost doesn't appear to be that difficult and the wastegate and boost controllers are there to control excess boost because a given turbocharger will produce too much. I haven't heard or read of anyone failing to build a desired amount of boost due to a leak. Like I said if the loss is 1 PSI (and I cant see it losing that much through a small leak like that) I will compensate for that by adjusting the boost 1 PSI higher till I see the given boost pressure in the intake. Is this logic flawed?

I have lived here my entire life and have always owned carbureted vehicles. I would much rather have a functioning choke in the dead of winter here than to worry about losing a small amount of boost that can be compensated for anyway... Unless I am wrong.

Please if anyone has done this unsuccesfully or otherwise, let me know.

Again, I am beginning to believe this is an issue of "I am doing it because that is the way it has always been." and that just rubs me the wrong way.

it comes down to a linkage sealing issue plain and simple.

I don't think the choke horn is any more of a restriction with a carb hat than a stock aircleaner lid would be.

every choke I have seen opens once you get some ariflow going. it will never really see a differential pressure (no more than a NA choke plate would see)

If mounted in a box it would function perfectly normal like.

most chokes I have seen need to be free to move so I don't think you could seal the shaft for it to any effect.

I drove my chokeless blow through in IL winters. I had to take a couple minutes to get some heat in the plugs but that was about it. if you can keep the bi-metal strip portion so you can retain the fast idle feature until it warms up.....will be vary handy to have. since the choke is only needed on warm up and at idle you can get by without it. it might require working the throttle a little more than normal is all.....don't forget once under boost you are cramming heated air into the carb...
Rule: Torque = Fun , Turbo's make Torque

sadly it really is one way or the other... don't be the pioneer that gets scalped.

I have great respect for the pioneers.

Since there doesn't seem to be much experience with trying it as opposed to just not using the choke from the get go, I will just try it myself and report the failure if it does not work . I am good like that.

It's all part of a learning process for me and if no one seems to have tried it, I will give it a whirl myself. I just cant accept the idea that something cant work because no one has done it.

I'm willing to bet there were a few people that told the wright brothers they would never get off the ground.

Thanks again guys, I'll let you know how it goes.
My garage:

Hey all. Just poking through some of my old posts and wanted to update this one in case anyone else is searching for an answer to the question that I posted.

I completed this turbo installation and have been blowing through the factory 1 barrel holley carb for some time with the choke assembly completely intact and operational.

Building boost is not a problem at all with this setup and if anything is leaking past the relatively small choke clearances, I can't tell.

Anyway, just wanted to revive a very old thread to help inform anyone else that may be curious.

Return to “Turbo, Supercharger, and Nitrous”

Users browsing this forum: No registered users and 15 guests