I’m considering buying a very low mileage ‘79 250 and using some of its parts on my ‘66 200. I know the head will work. What about the carb and distributor ? I’m also considering just replacing my 200 with the 250 but don’t really want to an electric fan and hood clearance issues (66 mustang). Any input appreciated.
T

Yes, those parts will work, but... The head will need milling to keep the compression up. The carb probably no problem, but I'm not sure what model it is from that year. The electronic distributor is good, but get the coil, wiring, and ignition box too.

Thanks. I saw the distributor module in the pile. Not sure about coil - probably no wiring. Newb question but to mill the head, does it need to be disassembled first ?

VIP
Supporter 2021
Supporter 2018
Hi, the late heads have a larger carb opening, larger valves, and a larger combustion chamber. Most guys have the head milled so you end up with a good compression ratio for performance on pump gas. Yes, the head has to come apart. I would bring it to a machine shop so they can see if it needs a valve job. If you are into the car long term you may as well get it done right.
You will want a larger carb anyway, maybe a 2 barrel. The Ford Duraspark ignition is very good.
Get the Ford Falcon Performance Handbook from vintageinlines.com and learn all about your Ford six.
There is a lot if info in the tech archives here.
Good luck

Swapping to the 250 engine would have a number of issues to work with. The 250 cylinder head is a reasonable and simple upgrade with a little help. Carb and Ignition upgrades, fresh 'valve job' with a target compression ratio for your driving and improved valve seals will wake up the 200's latent performance.


What about the carb and distributor?

... not sure if the '66 200 will accept later distributors with different dimension and shaft size. The casting numbers by starter will reveal actual 200 series and someone here would know for sure ...


Carb may be larger of 1100 series 'Autolite/Motorcraft'Ford, or Carter 'YF" or "RBS" .250 carb fits later 250 head's larger intake port/flange directly. '1100 is early design with higher CFM for 250 - 'RBS" was used for lower hood clearances of Maverick/Comet with 250, good chlice if Hood clearance is an issue. 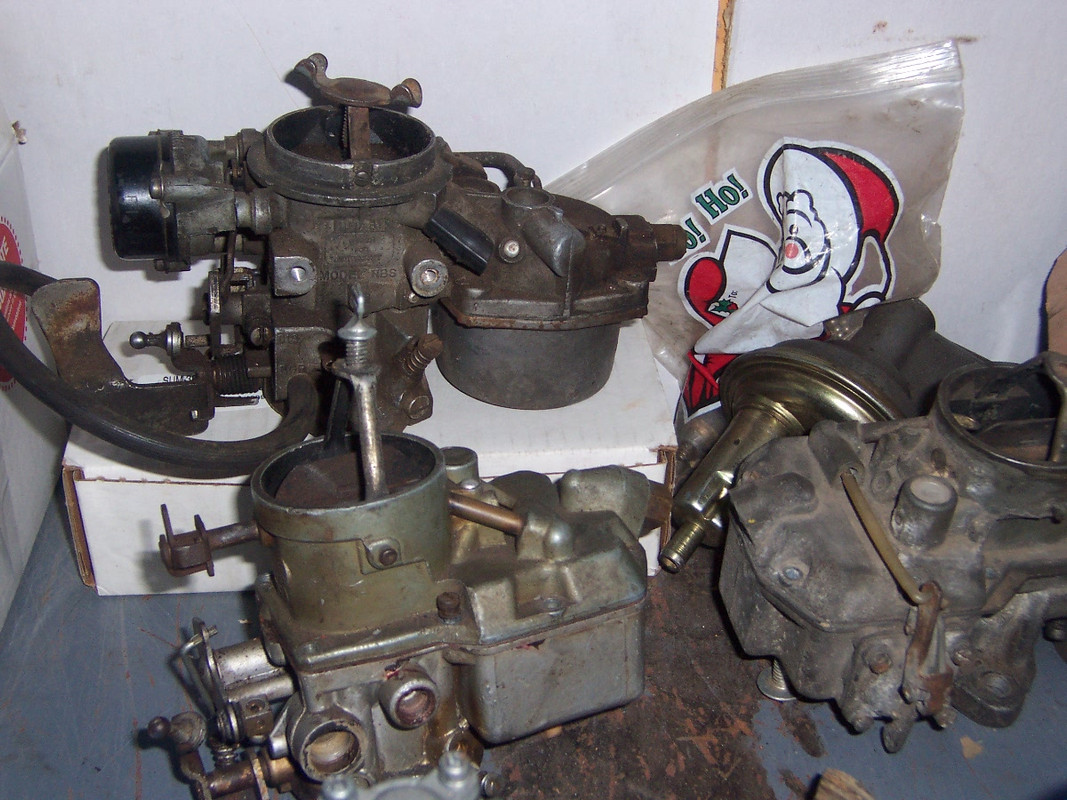 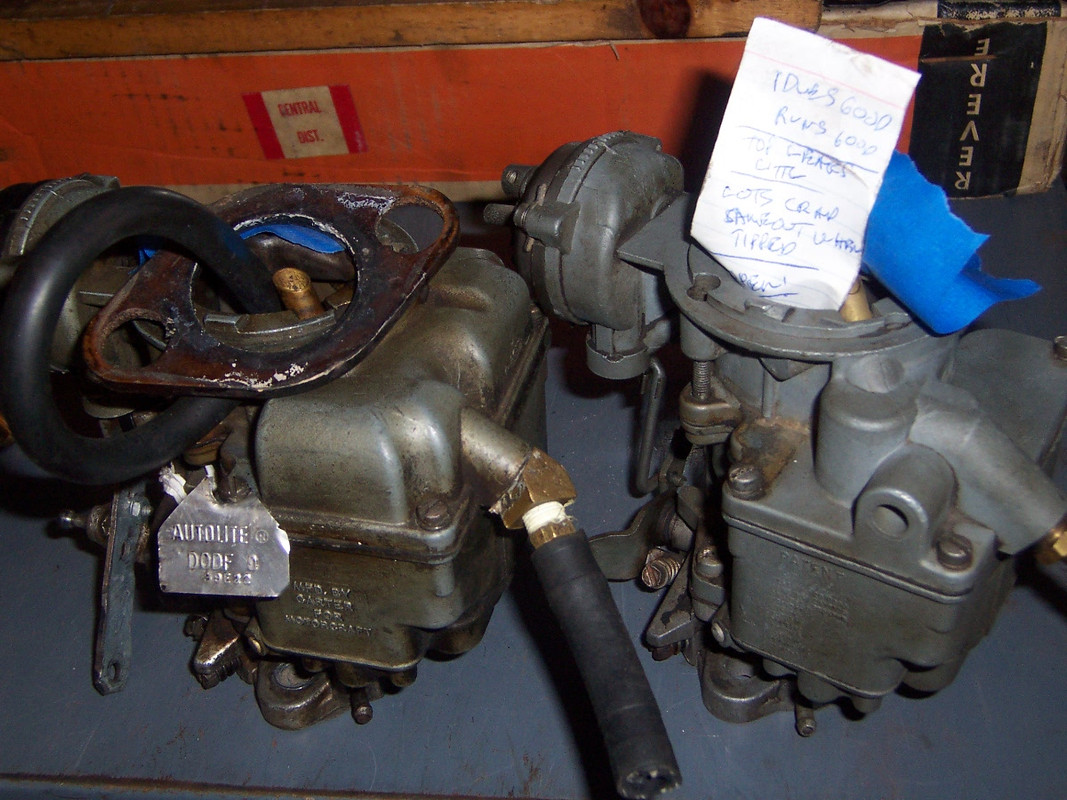 VIP
Supporter 2018
I installed a 250 in my 65 Mustang back in 1977. There are some fitment issues, but nothing that can't be worked out.
You can slot the boltholes in the engine mounts that attach to the block to lower the engine and get more hood clearance.
You can look for a low profile aircleaner from a 70s Maverick with a 250, or an offset aircleaner from an early 6cyl Bronco.
The 250 can use the bellhousing from the SBF V8 with a zero balance flywheel, so you can install a V8 transmission (stick or auto).
An automatic overdrive transmission can be installed behind the 250.
The 4-lug rear axle can be used behind a stock or mildly modified 250, just don't abuse it.

Thanks all. Very helpful. I actually already have a 68 3 spd manual in the car and my understanding is that it uses the same bell housing that the 289 used. I’m driving over Sunday to pick up the engine and some loose parts like the dist and carb. Here are the pics I have of it all. Not sure which carb is shown. I think all of its in the same condition - never used before.

The more time you spend now on research, the less time you will use later changing things that didn't work out

VIP
..already have a 68 3 spd manual in the car and my understanding is that it uses the same bell housing that the 289 used. ... Here are the pics I have of it all. Not sure which carb is shown..

Thought I had read ''69 250, actually looks like late 250 probably , maybe Granada. Distrib' is DS II with Duraspark OEM module, carb looks like Carter YF. The OEM emission piping appears already plugged off on Xhaust, still has EGR on intake flange I'd remove and seal off.

VIP
Supporter 2018
It would be interesting to see the part number on the steel shim head gaskets.
If they are for a 200 or 250 they would be a good acquisition alone.

Picked up the 250 today. It came with some loose parts that I presume are correct for the engine (’79) Including this carb. It appears to be the C1 YFA type. Is this a good carb ? Looks like it could work with mechanical linkage which is my preference. My application is a 66 mustang so hood clearance is a concern.

Staff member
VIP
Supporter 2021
Supporter 2019
REDLINE 10K
Congrats Ironhorse, that 1979 250 will make for an excellent upgrade in your 1966 Mustang its well worth the effort to install it. Looks like it's in very good condition too and has most of its original parts to get it running. X2 all you need to be able to use your existing 3.03 Trans behind it is a 1965 1/2 up 289, 302 V8 bell housing, or any year 250 six bell housing, a 250 six Granada / Maverick, Comet, etc. zero balance 157 tooth flywheel and clutch assembly to bolt on to the engine. Rework the motor mounts to drop the engine down a little. Yes the Carter YFA is a great carb to use. Best of luck

Thanks everyone for the feedback. Bubba, appreciate the bell housing guidance. Just to clarify, the bell housing currently connecting my 68 3.03 to my 66 200 will NOT work with this 250 transplant, correct ? Is the same true of the 9” clutch and flywheel I currently have ?

Also, is there any option to keep my mechanical fan with the longer ‘79 250water pump ? Will I have hood clearance issues with this YFA carb?

Rocklord, the gaskets have CODE 6051C stamped on one end. I’m not sure if the surface rust has ruined the sealing integrity. Will take some steel wool to them tomorrow and see how much pitting there is. Ironhorse said:
Thanks everyone for the feedback. Bubba, appreciate the bell housing guidance. Just to clarify, the bell housing currently connecting my 68 3.03 to my 66 200 will NOT work with this 250 transplant, correct ? Is the same true of the 9” clutch and flywheel I currently have ?

Also, is there any option to keep my mechanical fan with the longer ‘79 250water pump ? Will I have hood clearance issues with this YFA carb?

That’s correct none of your current back of the block 200 six parts such as the bell housing, the tin block spacer plate, the flywheel (I think these are only a 134 or 136 tooth diameter), the starter, or the 9 inch clutch assembly parts will fit on the back of a 250 cu. In. Six. You will need all these same parts from either a 250 six car with a manual trans or you can use the 6 bolt bell pattern tin block plate, the bell housing, and a manual trans starter from a SBF V8 car with a 157 tooth diameter flywheel so the starter will engage and work right.

We have several site members that have fitted the 250 sixes into their 1964 1/2 to 1966 Ford Mustangs as well as the early Falcons and Comets. 250 six engines are 1.661 inches taller and also a little wider than a 200 six so it needs to be lowered in the chassis some to have enough carb and air cleaner to hood clearance. So yes the Carter YFA carb will clear the hood when the engine is set down into the chassis at the right height along with the correct type air cleaner fits real nice. A mechanical fan can also work with the right selection of parts I believe that the radiator will need to move forward a little and you need to only use a very short fan spacer of about 1/4 to 1/2 inch, maybe a couple of those that did this swap in an early Mustang will chime in soon to verafy their build parts. Best of luck
D

Responding to the fan, engine mounts and air cleaner.

The 250 I have in mine (from a 73 Maverick) fits just fine with the mechanical fan and no spacer between the fan and the water pump pulley. The fan is about an inch from the radiator. I did not have to move the radiator at all (photo below).

The engine mounts were an issue. I went through a lot of research, head scratching and cussing until I decided to just use a piece of scrap metal from my bin as a lowering device for the stock 66 6-cylinder mounts and perches. Basically, I drilled an extra hole half-way between the existing holes in the stock engine mounts. I then used the stock engine mount holes as a template to drill holes in a piece of steel stock. This scheme raises the mount on the engine and lowers the engine by about 3/4". Picture attached.

I tried an offset air cleaner from the bronco. It didn't fit the top of the carb (it was for the 200 engine, I think), required extra support to hold the offset section up and didn't really fit in the engine bay because the export brace was in the way. I ended up buying an air cleaner assembly from ebay. it's for a 73 Mustang with the 250 I6. Units for the early Mustang/Maverick/Comet work well and fit under the stock hood if you have lowered the engine. It's preferable to get one that has the correct bottom shape for the carb you're using.

Oh well, easy come easy go on the gaskets. Thanks John, that’s very helpful. Is that a custom monte carlo bar? I’ve not seen a wide center section like that before.