JPierce said:
I Didn't realize they carried the iron head into the late 80's. Thought they discontinued the iron head after they cast it in aluminum. Had to look up what Pi55 was, hah! Here's a pic of the car he raced at Pikes Peak that I think had the 250 Xflow engine. It was turbo'ed and on propane. I should know all the details since I built the car for him but we built a lot of different cars I just can't remember much about this one. Most people think that year mustang was forgettable anyway. My mother threw out tons of pictures of his old race cars and pics of my cars I know you've done of research on these old 6's, did ever come across any articles on this car?

Iron x flow head production died in August 1980, and thereafter, just Cleveland 302 and 351 heads for one and a half years till late 1982. All alloy heads for Falcons and Cortina were from Honda Japan, and machined in AustralIA, with a huge degree of custom CNC port variations. Ford Australia didn't use a CNC machine to port heads, it kept the information in a CAD data system, and used Honda and Yella Terra to assist in making changes.

The iron head died in 1980. The overhead valve alloy/aluminum cross flow continued in production for 5 long years in X series tray Utilities and Pannel Van Falcons after the Over head Cam engine came out in 3.2 and 3.9 liter form in December 1987 for the EA 26 engine in the new E-series Falcon. That was the 1989 Thunderbird style Falcon with that Honda Integra style no hood cab forward look. Ford Australia then started casting aluminum heads in Australia in 1988.


Your step dads Pikes Peak Mustang Notch was one of my great favorites, as was the red two door 250 turbo 4bbl Maverick with TRX tires on New Zealand made Ford Cheviot aluminum rims. All of those cars were an inspirating to me. The New Zealand and Australian plants got asked to supply short order parts to the US, and you don't have to look far to see Aussie or Kiwi casting details with AR or Cheviot or ABER on Cleveland heads, alloy wheels or LPG equipment. It was a way Ford protected itself from Asian copying. Honda was a very trusted source, so was the Aussie and Kiwi plant stuff. If it was copied, everyone knew it wouldn't get return business orders from Dearborn. Again, as Chuck Missler once said of brake caliper and component company Kelsy Hayes...the mangers wore it's supply to Ford like a written basee of honor. If a 1966 Lincoln Continental with disk brakes had any problem in Ford development testing, the company would make good, even if it bled red ink. I think LG today might still do that, but back in the 60s, Ford had suppliers who would honor united we stand integrity.

It's normal to do the photo biff...it's a lady tidy thang. Probably....The tidier the lady, the more they do it...lol. My wife did it with natural mom's photos as well as my old Falcon and Cortina pictures. Best thing is to get over it. But the magazines and all Aks follower's at HAMB'ers and jalopnik have gotten some awesome the pictures of some cars. Jay Storer may not have been an angel, but before he died of Lewy Body, he was still taking photos, so I'd not be supprised if his family didn't still have in line six pics from your step Dad.

You won't be aware of exactly what photos are what because AK was clearly a savant...he understated complicated things with Automatic Autolite Understatement. And his mates, Wally and Co. ..all the same. Way ahead of the curve. You also....

Big Al Turner and Bruce Sizemore still talk.Al's son in law is Australian and through both Ford and Chrysler, he has a clear idea of what parts were supplied by whom. Even though he and Bruce are 80 something now! They will have access to some of your step dad's exploits, as well as the Australian and Japanese Honda head development which was also done in part with ex Repco dyno engineer Bill Santacessione, and Ford Australias Frederick Bloom, David Ford, and one other guy I can't name . As the Frenchtown Flyer will tell you, a lot of that knowledge is to go to the grave, not discussed, but it's not because no one cares. Ford invested a lot in sacred trust of the employer, employee relationship, so its investiture is not gonna rabbit hole down to legal battles. Many shared things are akward to on share. It's the same with all big US companies who also do Navy, AEros pace, Defense and Overseas development.

Anyway...back on to the X flow. A seriously strange, for sure alien cousin from the Antipodes.Which looks like a Cleveland head that slept with a Honda aluminum foundry. Because....in fact....it did!
Last edited: Oct 29, 2021
J

Approved Vendor
Thanks for the info. I'll keep looking. I still have some photo's of his race cars I am going to post at HAMB one of these days, maybe it will jog somebodies memory.

JPierce said:
Interesting stuff. I have been racking my brain trying to remember some of the details of one of my step dads race cars back in the late 70's. It was a Mustang II and I think it had the Aussie 250 6 with a cast iron OHV crossflow head. Don't know why he did get the aluminum head. I hit a dead end searching the web for info on it. Found a picture of the car but nothing on the engine. I remember he was impressed with it. He pulled a 300 6 out of one of his f150's and put this 250 in it to do some compressed natural gas emissions testing.
Click to expand...

Any Ak Miller Propane Foxes around?


[URL='http://vb.foureyedpride.com/member.php?6402-hjhnracing'][B]hjhnracing[/B][/URL] said:
The Red 1981 Capri actually belongs to my buddy. It was Ak Miller's personal vehicle back it the early eighties. I had a chance to buy it for $7000 but passed on it and bought a brand new 1983 Capri L 5.0L which I still own today. The 81' Capri is a twin turbo 351w with an AOD running 12 PSI of boost on propane. I ran a similiar setup but with a 302 and single turbo. I am currently building a 347 with a turbo but switched back to gasoline just recently.[quote/]

If I was a betting man, Your step dad would most likely be doing some on the quiet development work with Fred Bloom from FoMoCo Australia.

A lot of Fords work was to support young mechanical engineers, so the Georiga Lockhead Wind Tunnel, or a few competition based cars might be working on forward development parts validation.

The 1980 Round Australia Cortina, a Pinto IFS car, even used upper mounted Fox style dampers and the iron head in aluminum 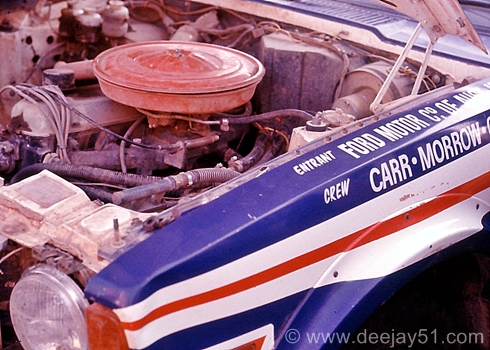