I have several choices to make:

I have a 74 stock exhaust manifold and a set of dual outlet headers that came with the car when I bought it. I can buy a dual outlet stainless steel header off ebay for $120. I would prefer a single outlet header but I havent seen one of those anywhere.

I have 2 C9 manifolds and maybe a line on a large log manifold off a 78-ish Fairmont.

Im leaning toward a Weber or tripower. Easiest is a 1V, but it doesnt tune as well as a 2V and I dont think thats enough carb for the Schneider cam.

has anyone blocked off the center carb hole and run 2 - 1V carbs?

I think the Weber has the smallest footprint and is easiest to adapt to the head and tunes well.

Scott Drake sells a single out header, they claim it fits the 250. They're real proud of it though.

https://www.summitracing.com/parts/sdk-c3oz-9430-h1
It ain't gonna fix itself

Yeah, SD can just go ahead and keep that.

I;ve seen a head hogged out for 2 2v with the center hole covered (like U suggest) in a thread here somewhere but it would seem to have the same problem as stock moved to #s 3&4 instead of 1 & 6.
Yes the late model head is the 1 (altho the M is great for the mill, fill, mill direct mount 2 or 4V). It's all in 'the Handbook'. U got one, no?

Like all automotive Qs - answered by the "My application?" answer. "Cam as center of engine build" selected by 80% of operation RPMs'n gasoline octane. Head flow CFMs are later and more directly in-line w/this Q. But as a system these all figure in on ur Q.

I like ur offie trips w/3 glass bowled holley 1904 as a theme clincher in ur vehicle (yer 1st idea). But thats 'style', looks, fashion (plenty 2 B said 4 that if yours is the same as mine

What always works with a single hole feeding a forward (123) and astern(456) set of cylinders is a two barrel carb with two idle jets and a proper, deep float bowl pointing to the rocker cover. Jets and well tubes shouldnt be uncovered much on a 12 % incline. On V8s, the jets are pivoted through a common center..on our big sixes, the whole carb is hanged out to dry on the side of a one foot pole called the 240 Big Six...

Weber 38s, 32/36's, Holley Weber 5200/6200/6500 have a small fuel bowl, a restrictive needle and seat and are effected by slope and under hood temperature. The problem with the staged Holley Weber is it often came without a second idle jet or squirter, so fuel only comes out of one circuit. The 38's are good, but for a 300 cfm carb, the float bowl is very small and the emulsufucation (added air) makes them heat prone. Ill post an example of how a 2bbl carb swap can go wrong on a 250 cubic inch six. You need to avoid wrong steps that dont work for a fence mending or haulin rock truck.

That should help you out.

And a metal plate under the carb to deflect heat back to the exhaust. He has injected it with Chevy TBi and MegaSquirt. It works great.

It came off my 65 bone stock 289. It needs cleaning up but is in excellent condition.

I think the smaller venturi will raise vacuum and help the carb up to the point of being too small. 1.08 with 48's?

The difference is night and day. Initially I thought the 1.01 was on its last legs. The car idled poorly and had no power, The 4V will roast the tires 1-2 and 2-3, this is on a stock 289 with dual exhaust.

I opened the 1.01 to have a look inside. It is clean, no varnish or wear. The throttle shaft is tight. I think it needs a kit and is good to go.

I also have a new China carb, but it has a choke pull off on the front of it. Im not sure I need the pulloff but it will not fit on a inline six with it. No specs on what size it is but the venturi looks to be at least as big as the 1.14 carb.

Will the Chinese one take ford jets? It wouldn't hurt to run the 1.01 but it's going to be to small for you I bet, like your experience with the 289. A 1.01 flows 240 cfms, so definitely an improvement over the 1v.
It ain't gonna fix itself

Crunch time. As soon as I measure the combustion chambers, the head is off t the machine shop.

If I go with tri-power, what carbs should I run? They need to be easy to obtain and not be out of the world expensive. Ive seen guys with almost 2k into a log head. For that money go Oz or vintage inlines.

carb for 250 - what is the final application?

keepa choke on the center only, set up w/that carb (pretend the 2 'extra' - they're not there/block off) & get running right, then add the 2 ends.

The carb that was on car when I bought it was also an 1100, but with the 1.5" carb hole the AT dashpot and a SCV, my dizzy is not a LOM. I dug the carb out this morning to look at it and Im pretty sure it is one of the China 1100s that are sold on ebay. There are no markings on the body of the carb at all.

I could buy a second China carb and delete the SCVs and run three 1100s. Those run about $140 each on ebay.

UREMCO tells me that they are buying China carbs and using them as cores since there are so few rebuildable cores available now. They change the floats, gaskets and send them out the door for almost triple what they pay for them.

The other issue is, do I have room under the hood for a tripower? I measured before I removed the head. With the 1100 on the factory spacer and a SD chrome open element aircleaner, there was 2 1/4 inches to the hood. Im guessing there is less room at the front and rear of the manifold.

I have a spare 250 block and head. As soon as I get the 200 out Im going to install the bare block and head and take some more measurements. I have a set of the correct 250 mounts, so Im hoping that what I have will still fit.

Visuals normally help some, try these. For the 250, they had to pull the carb height down with either a YFA Carter or the RBS Carter. 1100's and 11001's don't figure under the hood with an air-cleaner unless you do some freaky stuff like what MustangGeezer does with his foam sealed air cleaner.

the Mavi GT below.


There is still room at the inn. A large hood bulge was needed then, and is today.

Ak Miller got away with mechanical secondaries in his Triple Carb Maverick i6's, but Offy made the kit,

MustangGeezer had every different system under the sun except triple. 200'S are only 7.830" tall, not 9.469", and the Maverick had less hood depth.

Took a saw and hacked off the choke housing and cleaned it up with a belt sander. Took it for a test drive and got to play around with the new Eagle S/S's. Goes like heck and hooks up!


using an Escort air cleaner, he could fit stuff when the engine is almost 2" shallower than a 250. 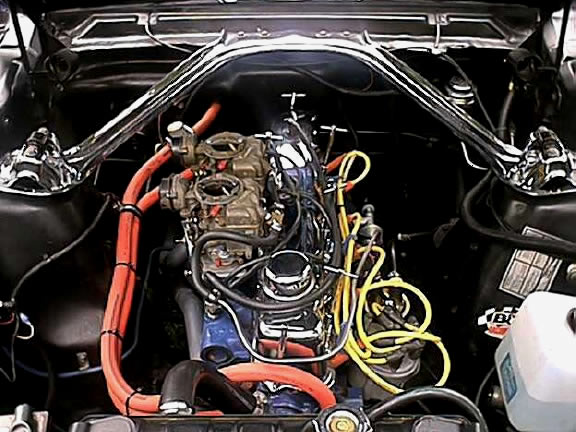 I wonder how he got those air hoses to stay rigid?

Thats a nice setup and I considered dual 1Vs.

On a side note: When I try and post a pic it says the board quota has been reached. What does that mean?

Georgia200 wrote:I wonder how he got those air hoses to stay rigid?

Thats a nice setup and I considered dual 1Vs.

On a side note: When I try and post a pic it says the board quota has been reached. What does that mean?

It could be a local fault.

If you are posting photos, there are only so many you can save to the Fordsix server.

if you, um, "link" a picture, it wont repost if there is more than ten pictures


"https://fordsix.com/download/file.php?id=2702" in between the ""SixySix and Ninety Nine"" is the link.

Im going to whack 030 off the head after I double check the block height.

Whats the thinnest head gasket that can be found now?

I did some mocking up on the cylinder head tonight.

I dont think I can modify the log for a 2V and still close the hood.

Im going to try and get the 200 out this weekend and bolt the bell to the spare block and C4. Once I sit it in place with the 250 mounts I will know exactly how much room I have to the hood.

I put a piece of 2x8 on the 200 block and sat the head on that with a piece of cardboard for the gasket. Thats pretty close to what I will have with the 250 provided the engine mounts only raise the deck height 1.7 inches. That only leaves me about .4in of clearance to the hood. The 2V will be about an inch taller than the 1100. So, Im .5in short without an aircleaner.

What carb setup for my 250, what do U wanna do w/the vehicle

Users browsing this forum: No registered users and 11 guests