Having deciding to put a turbo on a 200 i built a while ago. Ford 200 77 head ported direct 2 bbl mount 8.6 cr. The current cam is a vi 264-264 110. With it running it has crazy vacume at idle. And it is requiring race fuel or I have to lean it out a fair bit. What cam have you guys used that's more turbo friendly. And pump fuel r
Friendly. Also there like no turbo lag at all.

Here come the questions all at once.
This info is important.

Is the cam still installed straight up?

Are you retarding the ignition timing as the boost increases?

Are you also boost regulating the fuel pressure?

Cam is straight up and any adjustment and valves hit. Its draw threw so no inner cooler or need to change fuel pressure. The timing is locked now as I can't get much advance out of it

You need both mechanical advance and boost retard in order to run on the street.
How much boost are you running?
What is the ignition timing locked at?

When you do a draw through you need to modify the carb so the power valve is referenced to the intake manifold.
Was that modification done?

So when is it detonating?

When you do a draw through you need to modify the carb so the power valve is referenced to the intake manifold.
Was that modification done?

When you say mod the power valve, on a draw threw what would it be affecting

Your dynamic compression ratio with the 264 cam at straight up is about 7.1 and you shouldn't be having a problem especially at high elevation.
What are the air fuel ratios from idle to WOT?

And on the power valve, the port is the small hole between the berrals? Would a valve for a much higher vacume be the awnsers or not?

Did some resurch and found the way is to block the hole, still threw the side and install a nipple to manifold vacume. Read it from a blower form, but I beleave that's what's needed

That is correct.
Nice research!

If the carb is before the turbo you need a mechanical seal on the compressor side or you will suck oil from the center section and that can cause detonation ... What turbo did you get and do you know if it has the right seal?
66 Mustang Coupe
200 turbo w/lenco 4-spd
stock adj. rockers, stock timing set, ARP studs
best 1/4 mile ET 9.85/best mph 139 on 8 lbs progressing to 15 lbs boost
Went 9's when 10's was fast.

It's from the buick grand national 3.8 my father had he was going to put in a jeep but never happened. And it's supposed to have the carbon seal.

64-5mustang wrote:It's from the buick grand national 3.8 my father had he was going to put in a jeep but never happened. And it's supposed to have the carbon seal.

Draw-thru turbos were the cutting edge of big HP gains on existing engines from VW's to Big Blocks'.

With the Draw-Thru (sp) setup, high vacuum at the carb will keep PV closed at all throttle positions. Carb'd draw-thru turbo's typically have a way to get the Power Valve Circuit to OPEN when the Intake manifold transitions to positive boost pressure .
GM-BOP V6's and V8' draw-thru turbo's used a specifically built Quadrajet that simply ran the PV vacuum circuit externally and used a proprietary vacuum switch mounted on the intake manifold to 'switch' the carbs PV circuit to open under boost. ONLY the BOP draw-thru Quadrajet has the external port. I used a generic vacuum-dependent small engine safety fuel line shutoff to 'switch' the Qjet's PV circuit on my Draw-Thru BOP setup.

Draw-thru setups require huge CFM increase as boost-RPM increases. the proprietary external PV ported Quadrajet , the BOP system uses is rated at 900 CFM at WOT !. This is the reason for the 'Crutch" or supplemental fuel supplies tied to boost that were often built.


I added an external PV port to this blow-thru carb 2300:

With normal NA operation, power valve 'opens' / adds more fuel when vacuum/suction drops as you press the accelerator and the carb throttle plate opens to atmosphere. The PV's are rated in vacuum typically @ 2 to 9 hg. Obviously that is the opposite of what you need when you pressurize / blow-thru a carb.

A new option for Blow-thru forced induction is a proprietary Power Valve (Holley type) made to Open under Boost which basically operates backward from a normal PV. It stays closed until bost and is adjustable. This requires sealing the PV vacuum port and letting fuel bowl pressure (Boost) operate the PV. 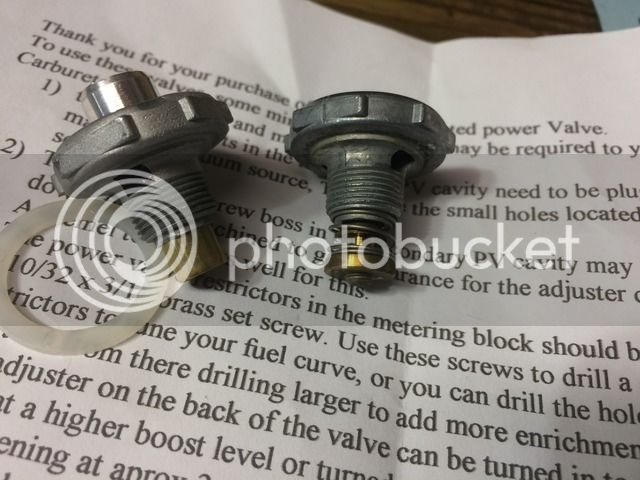 Since 'turbo' postings generate so much interest and contrary opinions I want to add a few more:

Fuel supply conversion for BLOW-THRU usually entails a separate elec. fuel pump and its' safety interlock, return to tank bypass fuel line for boost referenced regulator return , etc. since carb fuel bowl is same as boost. DRAW-THRU conversion can use any pump mechanical or elec that can supply enough volume to carb since carb bowl isn't ever pressurized and doesn't need boost reference.

Ignition timing is the most misunderstood: For high boost - high performance @ $ 500.oo + these days you can control timing, draw your own curve referenced to boost - no problem (MSD etc). For under $100 you can 'lock out' an OEM distributor OR find an emissions years (@71-78) DSII distributor and peek under reluctor plate. Most are already limited to near optimal advance for safe low boost use. The vacuum advance can actually still be used if sourced from intake since vacuum will transition to boost and no vac advance.

Return to “Turbo, Supercharger, and Nitrous”

Users browsing this forum: No registered users and 2 guests