Car has done just over 1,000 miles now, which is notable not only because it's done barely more than that in the last three years, but also because it's only taken four tanks of gas. *Much* better fuel economy since the swap, mid to high 20s pretty reliably where previously I was averaging mid teens. In the car's defense, I'm sure a lot of that poor mileage was a result of running an LoM carb without an LoM distributor. I probably do 60-70% surface street driving, since the 2-speed auto and 3.50 rear end isn't much fun on the freeway. That's about 3400rpm.

Anyway, I pulled the plugs yesterday to replace them with iridium plugs. More experimental than anything else - I figure these plugs do well on other cars with similar ignition systems, so I wanted to see what they do - if anything - on the Falcon.

The plugs than came out have around 1,500 miles on them. 500 of that was on the old ignition and they did NOT look pretty when I fired up the EDIS. Quite black from an obviously rich mixture. 1,000 miles with a modern ignition system actually cleaned them up quite a bit! There is some baked-on carbon, but otherwise they look quite healthy to me! They are NGK V-Power (copper/resistor) plugs. 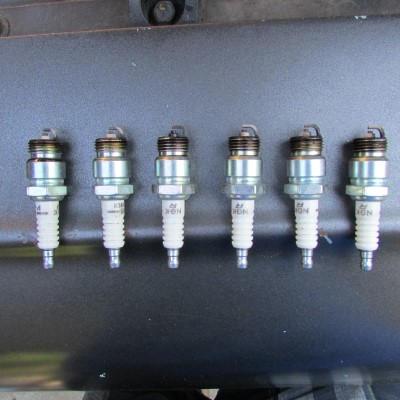 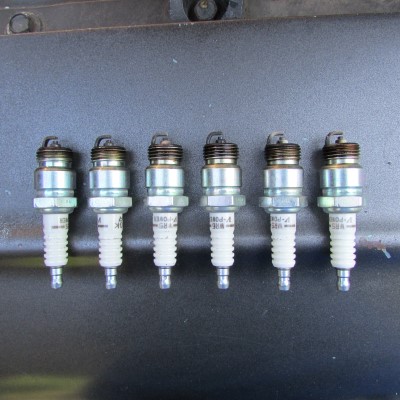 VIP
Looks good. I dropped some cash on the iridium plugs and drove from DC to boulder last summer - 1,750 miles - and then a bit around town here in Boulder. Took the plugs out at around 2000 miles and they were starting to disintegrate. Not sure why, haven't had that problem with other plugs and the iridium plugs in my Infinity have 55,000 miles on them with no problems, but you should check them periodically to make sure they are doing well in your engine.
T

I will definitely pull them out periodically.

IME, some cars *really* don't like iridium plugs - my Saab would be a good example of that. I think it has more to do with the ignition system than anything, though. Now that you mention it, though, I could see how a mixture problem could also give them grief, since there isn't much electrode there. A rich mixture that fouls the plugs would probably have a pretty profound effect on the pointy iridiums.

In any case, it's something I plan to find out sooner rather than later as I intend to drive this car to Vegas in September. 1000 mile road trip in a '62 automatic Falcon? Surewhynot. What could possibly go wrong?
M

VIP
I just ran across this thread. Great writeup!

I'm using an older, self assembled version of Megajolt to run the EDIS4 on my son's Zetec powered MGB. It works great; better than any distributor system we have used.

It's hard to see in this photo, but we took the same approach to the trigger wheel location. I used a flat bar bolted to the block to hold the sensor. In our ignition map we also put a reverse rise on the lowest bin to help stabilize the idle. Our idle is set at 950 and you can see it vary no more than 30-40 rpm on the tuning screen.

He took it on an extended trip this weekend and it knocked down nearly 30 mpg (in spite of all the horsing around) and ran flawlessly. I'm really liking the bike carbs, too. Very smooth, no stumbles, great mileage, and great idle.

VIP
Hi, anybody know if this will work to ditch my distributor. Modifications required, I know...

That is REALLY interesting. For 35 bucks it is worth a shot.

VIP
Well that's true, considering how much money this little bird has eaten $35 is nothing!
T

What do you mean by "ditch your distributor?" You mean like "fill the hole" or perform some sort of function? If the former, why not just go to a junkyard and get the "plug" from a 2.3l Mustang as I did? The bottom part of the plug and the synchronizer are the same. If the latter, well, I'm not sure where you're going with that.
F

VIP
I don't need a distributor with my new setup, but I can't just plug the hole because the distributor shaft also drives the oil pump. So, I need a low-profile oil pump drive that will clear up some space in my engine bay.
T

Just use the plug from a 2.3l Mustang with DIS - the posts about the mods that need to be done to it are about 2/3rds of the way down this page. 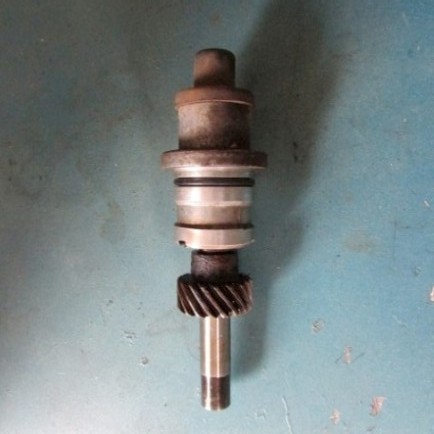 VIP
A junkyard would charge $35 for one that needs rebuilding.
Plus you'd have to go get it.
Hurry up and do this so we can see the results.
F

VIP
Thanks, that's what got me started down this road. Problem is I don't feel like driving all the way to Denver and digging around the yard for a 2.3. Can't seem to find this part on the market, either. I don't suppose you'd want to sell me one???

Heck it's even cheaper in Canadian money!
Anyone else? :mrgreen:
T

falcon fanatic":oqatu44q said:
Thanks, that's what got me started down this road. Problem is I don't feel like driving all the way to Denver and digging around the yard for a 2.3. Can't seem to find this part on the market, either. I don't suppose you'd want to sell me one???
Click to expand...

Oh, got it. I think I still have the spare one I got. Let me look for it this weekend - I definitely don't need to hang onto it.
F

VIP
Yes, let me know. In the meantime I'd already ordered the part that jackfish is pointing out. That's the same one I posted a couple of posts back. Should be here this week, it's just that the one thesameguy has doesn't have the sensor hookup on top so it'd be a cleaner install.
T

Yep, still have the spare. It does not have the gear, but I believe you'll want to use your own.

VIP
Allright, I'll PM you if I need it. Thanks!
T

VIP
Sent you a message.
T

Yep, replied last Thursday but have not heard back...