Idiot's guide to turbocharging the falcon 6

Introduction: I have just finished (well, for the moment) turbocharging the 200 in my ranchero. I learned a lot in the process of doing this, and would like to put that down here for others to use. This IS an easy project, and a very rewarding one â€“ but no need to re-invent the wheel. There...

Since many of you own Ford Falcons, you may be members of the Falcon Club of America (FCA), and if so you receive their monthly magazine, The Falcon National News.

If so, check out pages 24 and 25 - there's a certain '62 Ranchero that you may recognize from the forum. 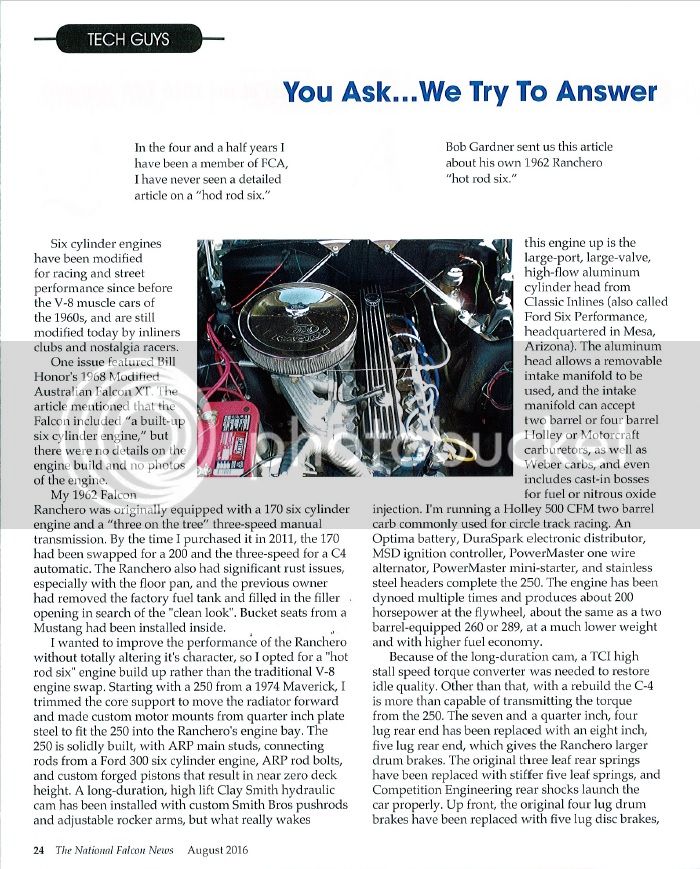 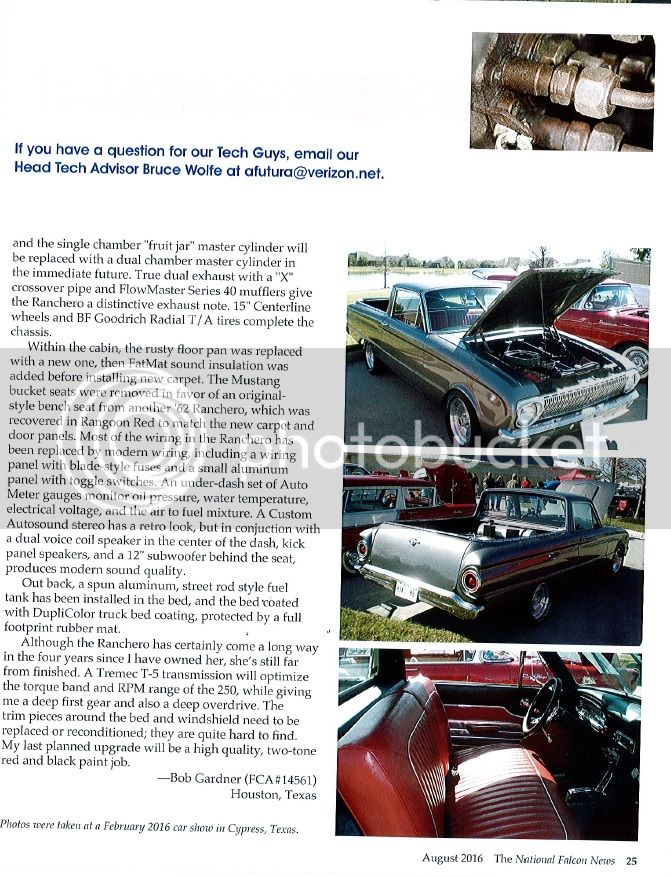 In Feb, Mustang Monthly published "Guide To Ford Six-Cylinder Performance".
And the latest issue of Legendary Fords also has an article on our sixes.

Both have some errors, but who's going to complain.
All this FREE advertising is GREAT......

Part II of our article in Legendary Ford is now on sale.
For more info, check the topic under "Announcements"
http://fordsix.com/forum/viewtopic.php?t=53091

I'm hoping this issue sells well too, so they keep doing articles on our sixes. IF you can afford one, please stop and pick up a copy from Border books, or order from our website. It would be greatly appreciated.

Also letters to the edditor would really help. Let them know we appreciate the recent attention they've given to the sixes.

If you've got a nice ride, send in some pics and info. Who knows, they might decided to feature it. Make sure you let them know what shows you plan to attend, so they can stop by and check it out.

The DuraSpark II Stock System Parts
https://www.fordmuscle.com/archives/2006/12/DuraSpark/Images/duraspark_sm.jpg
Note that the only differance in 4, 6, or V8 engine's DuraSpark II parts are mainly the just the Distributor that is engine specific, plus it's Cap, Rotor, and Spark Plug Wire Set most all the other ignition system parts used are usually the same. I.E. The Coil and Blue Strain Relief ICM, Wire harness is the same except it might be longer for a Inline Six over that used on a 4 or V8 engine.


1. First thing is to test is the condition of the battery and its charge, clean the battery posts and the cable terminals. The battery charge needs to be at least 12.5 volts (Write down your voltage reading result for reference) if its not at minimum voltage then try charging the battery up and retest. Now you need to do a cranking voltage test on the battery (again Write this result down for reference), if when your cranking the engine over the battery voltage drops to less than 9 volts the battery will need to be replaced. Again these are the first things to do and is very important to check out that the battery voltage is at the minimum voltage or higher, plus the battery cables condition, cleanliness of all of their connections at each end and need they need to be tight before you can accurately do any other voltage reading tests.

2. The voltage to the ignition coil positive terminal should be at the same voltage reading as when your were cranking the engine over. If its not then clean any corrosion, repair or replace damaged wire coming from the ignition switch (Usually this was a Pink Wire for many years), or if there's no damage then it’s time to replace that worn out ignition switch if you get a lower voltage reading. Next with the power switched off use your Volt / Ohm Meter to test the DS II coils primary resistance at its two terminals. Replace the ignition coil if this reading exceeds 3 ohms resistance.​

4. Plug back in the distributor wire harness again, test the cranking voltage to the ICM (Ignition Control Module). Probe the White wire to read its voltage at the ICM while you are cranking the engine over. If the voltage is weak (below the cranking voltage) or there isn't any voltage at all, examine the White wire for any type looseness at terminal connections, clean any corrosion, check for any external wire damage, or internal wire breaks from the starter solenoids S terminal and repair as needed. If the White wire checks out as in good condition then you will need to replace the starter solenoid.​

5. Next Probe the Red wire at the ICM with the ignition switch in the Run position, the voltage should be the same as it is at the battery. If voltage is less then at the battery check the condition of the Red wire for looseness at terminal connections, clean any corrosion, check for any external damage, or internal wire breaks repair as needed. Next check the Ground wire resistance by probing the Black wire at the ICM and Distributor Plug. clean or repair the Black wire if a Volt / Ohm test shows more than 0.3 ohms resistance. If the trouble still continues and all other ignition system parts have checked out as good then it is time to replace the ICM. ​

Staff member
VIP
Supporter 2021
Supporter 2019
REDLINE 10K
Group of some very early Hot Rod Magazine article's on the Small Ford Six'es from the 144's on up. Interesting reading to see how the old timers made some power with upgrades to their Falcons, Comets, and Mustangs back when they were new cars. https://fordsix.com/threads/ford-six-hotrod-articles.78168/

Staff member
VIP
Supporter 2021
Supporter 2019
REDLINE 10K
1960 Ford Falcon Holman Moody Prepped Race Car "The North Carolina Falcon" Part 1. This is a continuation car that the Holman & Moody Shop Employees built to Show and Display of the 1960 and 1961 Ford Falcons that they had built to compete with in the new "Compact Car Series Race's" this build is a very close recreation of the original "The North Carolina Falcon" display car for that series. The specs of what cars back then match with the exception that the original car would of had a 1960 144 Cu. In. Six with a 2.77 3 speed trans and a stock 7 1/4 inch rear axle. This car was built in 2006 and this info and below pictures are from the sale listing for it that I think I found back around April 10, 2014. EDITED

In 1960 Holman & Moody was given 4 Falcons and money from Ford to create cars to be run in the Compact Car series put on by Bill France and others. The first race was at Denver, a 6 hour endurance event at Continental Divide Raceway. Then, 4 weeks later it moved to Sebring for a 2 hour race for compacts just before the Grand Prix Main Event on Sunday. Bill France had several races in January,1960 at Daytona International Speedway that were televised by CBS. These races were run by Corvair's, Falcon's, Rambler's, Volvo's, Lark's, Jag's, Valiant's and several others. The drivers were some of the better drivers from that era being, Glen (Fireball) Roberts, Curtis Turner, Art Riley, and Pedro Rodriguez to name a few. The series was run for 2 years-1960 and 61 and then went away.

One of the cars built by H&M was a display car known as "The North Carolina Falcon" as seen in March 1960 Hot Rod Magazine. This magazine also had an article about the Compact car race in Sebring before the Grand Prix race. Several of Holman & Moody employees were intrigued by this car when pictures of it were found in the H&M library by Charles Farr. With permission from H&M, President Lee Holman, it was decided to recreate this car so a search for information was started. Several of the old H&M employees were located and they were drilled for information along with articles and pictures that could be found. It was also learned that this car was to be a test bed for the Rally Falcons that were to be built later. This car was built in 2006 and used as a show car and cruiser for several years. It was then stored away until last month when brought out and serviced.

It has a Ford 200 CI, with 3X 1V carbs, and a Dagenham 4-speed. When this project was started it took several years to find the correct donor car an early 1960 Falcon with no rust. It was located in a garage in Locust NC about 30 miles from the shop. It was stripped to the bare metal and primed. then painted with enamel paint as it would have been in 1960. All the changes that H&M would have made on the car were also added to include boxed suspension, bigger sway bars, traction bars, larger wheels and brakes along with frame rails.

The car will be sold with a clear NC title in my name, along with a BILL OF SALE from Holman & Moody, and a letter on H&M Stationary of Authenticity. This letter states that this is the only continuation car "The North Carolina Falcon" that will be allowed to be constructed.

The car is in excellent shape and has been driven over 3000 mile since it was constructed with no issues. The engine and transmission were rebuilt along with all suspension to include steering box brakes and rear end. There was no rust in this car and it was always garaged before and after construction. It has the original floors and trunk along with original sheet metal.

This vehicle would make an excellent display piece for a museum that wanted to show the compact series that was run in the early 1960's or a cruiser. There will not be another one produced by Holman & Moody. See the blow pictures 1960 Falcon Holman & Moody Prepped 1 to 20