Throttle body injection with Megasquirt on a Ford 240

Throttle body injection with Megasquirt on a Ford 240

I'm working my way through wiring up a MegaSquirt unit to control throttle body injection on my ’65 Econoline pickup with a 240 ci straight six engine. Once I get it running good, I plan to add a small remote turbo downstream in the exhaust system with the goal of horsepower in the range of 150-200 hp. That's a big jump for the ancient 240. Despite that, I've done nothing to the engine itself. It's bone stock with unknown miles. The truck runs great on the little one-barrel Carter carb, but I can't say it's exciting. It'll be interesting to see how the old lump survives the abuse.

I'm using the distributor and TFI ignition module that came on f150s with the 300 engine in the late 80s/early 90s. The distributor is a drop-in replacement. The TBI is a two-barrel unit from early 90s Chevy 5.0 truck. I'm adapting a Megasquirt unit I built for another project a few years ago and will add an Innovate wideband o2 sensor to the mix. I've got most of the wiring done and I'm currently running lines for the high pressure fuel pump and fuel return.

One problem with the Econoline is fitting everything in the narrow engine compartment. I built a simple log-style custom intake manifold to accommodate the Chevy TBI. I added a water temp sensor to the 240 by adapting the water neck from a 90s 300 engine. I've already done an alternator update, replacing the old original with a modern unit.

An EFI system requires an amazing amount of wire to hook everything up, including fuses, relays, power and ground wires plus sensors and controllers. Sensors include air and water temp, wideband O2 and throttle position. I had to run wires for the two TBI injectors, plus idle air control, the new fuel pump and the TFI ignition module. Surprisingly, the only two wires I’m using from the original harness are ignition start and run that hook to the starter relay. Everything else is new and mounted onto the driver's side wall of the Econoline doghouse. 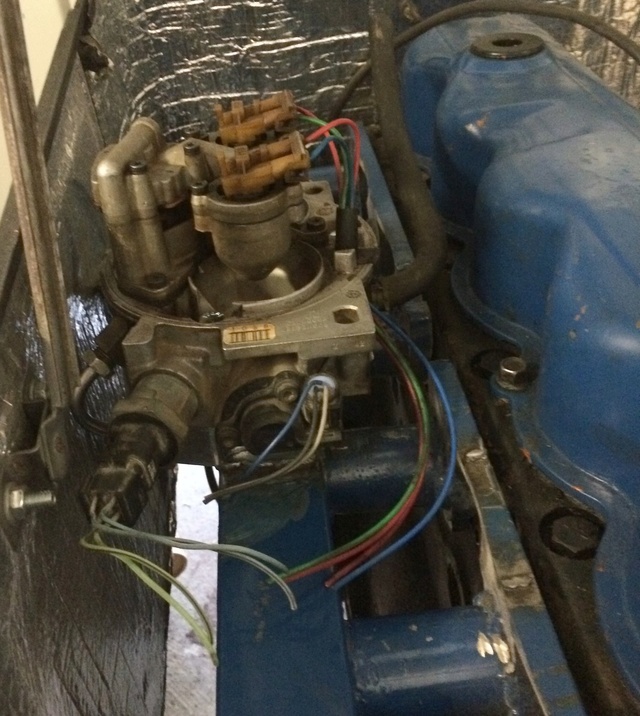 Tight fit, but the sides are up and the lid closes. 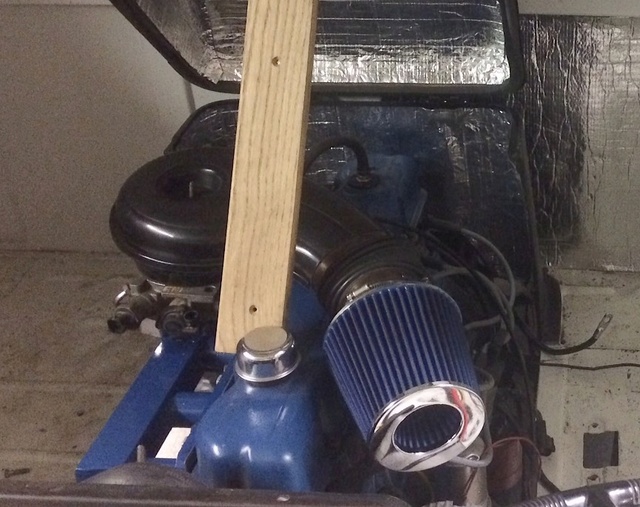 4.5L TBI Caddy intake with a small cone filter. I will most likely ditch this when I go turbo. Excuse the high-tech engine lid support. The support arm attaches to the sidewall of the engine compartment, which is off in this shot. 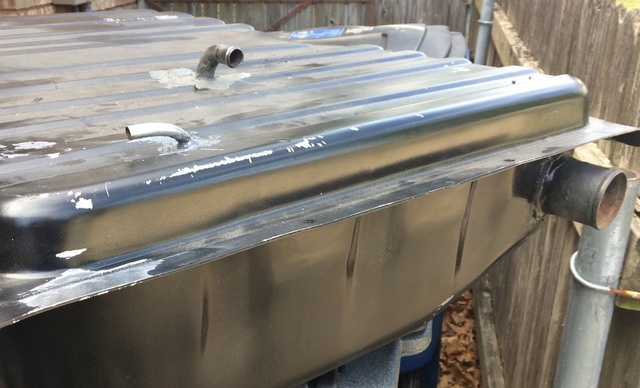 I added a fuel return line bung to my tank. This is a 20 gallon Mustang tank modified for use in the Econoline.
James, Tulsa, OK
1965 Econoline "Heavy Duty" Pickup
"A Work in Progress"

I'm very interested to see how this works out, cool build!

Thanks. I saw your thread on the f150 project. In the small world category, my first Megasquirt/turbo project was on an '87 MR2. I ended up with a little over 200 hp out of the 1.6 L 4age engine. That was back in 04/05 and the car is still running great, according to the current owner. I was the first person to squirt n spark the 4age and a bunch of people in the MR2/ae86 world ended using the system I helped develop, including the guy who owns DIYAutotune. His site still hosts a copy of the article I wrote at the time. https://www.diyautotune.com/support/tech/jamesls-original-megasquirting-your-mr2-article/

The Econoline is plumbed, wired and just about ready to fire. There's only about 20 things that could go wrong, but I hope to get it running in the next few days.
James, Tulsa, OK
1965 Econoline "Heavy Duty" Pickup
"A Work in Progress"

I have a 1967 f100 with the 240 CI I6. I would like to find out if the EFI intake and exhaust from an 87-96 300 CU I6 would fit my project.
Would the harness and associated electronics from the same years work for my truck? Any information you have would help and definitely be interesting. Very little information available on any of the sites I've looked at.

Finally got it running! Here's a short video:

This looks fantastic! I currently have a 93 that im working on adding a DIYPNP megasquirt to. My current stumbling block is now that I have the unit all wired up... I dont have a tune to start the engine on. Im looking for a fuel map. Ive heard you can use one from a 302 mustang to start the engine and go from there. But I have to ask, what did you do and how? I realize your engine is a 240, mine is a 300, but if there is any info that can help get my engine running (at least a base tune), would you be willing to share your knowledge?

If you download the current stable software for MS/Extra it will include a basic tune, including a fuel map that will get you started. You tune from there. The fuel map was very rich for my 240, but it started and ran first try. In the software you tell it what size engine and the size of your injectors. Of course there are a lot of other details you have to set up to match your truck, but the basic Fuel Map gets you in the ballpark with any size engine or injectors.

Do you have a thread going. I'd like to see details!

Im thinking about starting one, but I have not yet started a thread.

Thanks for the info!

I got my 1965 Econoline pickup running recently using a Ford TFI ignition system providing the RPM signal for a older DIY PNP v1.1 board and ms2extra-release-3.4.2. On this project I'm 'squirting the original '65 Ford 240ci straight six. I'm using a Chevy TBI (throttle body injection) on a custom log manifold. The TFI distributor and ignition module are from an early '90s F150 300 ci six. The TFI distributor was a drop-in for the old 240, with no mods required. The two-barrel TBI unit is from a early 90s 5.0 Chevrolet. Its low-impedance injectors need 8 ohm, 20 watt resistors to make them operate as high-impedance.

I got a good RPM signal running PIP through the Opto+ input with a 1k ohm, 12v pullup and a stable Spout signal by running it out of Wled (Spark A output pin), also with a 1k ohm,12v pullup. I set Spark Output to "Going Low." I'm using the gray Push Start TFI module, and I set Dwell to Fixed Duty, 50%. Spark mode is Basic Trigger and all other settings were pretty standard.

The v1.1 DIY PNP is based around a Microsquirt from a few years back. I'm not sure how that system differs from the newer Megasquirt or Microsquirt boards, and have no real idea if the settings that work for me would work for the newer systems.

If anyone is crazy enough to try this, here's a wiring diagram of my build:

Users browsing this forum: No registered users and 4 guests