Ford is really clever, but TFi has some major issues because its not understood well.


Since the harmonic balancer is 6-3/4" on everything, the 80-84, external D2-II Crank triggered parts can be used to fix up a TFi that isn't Dual Synch.

PIP = Profile Ignition Pickup, the sensor inside the distributor.

The PIP system uses a Hall cell magnetic sensor, which is a prox sensor, a distance ranging device that generates a reference and zero voltage as the Shutter Wheel passes between it and the Magnet. It is three parts.

Get the wrong parts not up to quality, and the sensor will stop transmitting.

Replacement parts have a terrible reputation. Ford OEM, reasonable, although they too are suffering from some approved supplier problems.

If its not working, then you have to get an aftermarket Hall Sensor and you must check the PIP Shutter wheel for magnetic quality and the spacing of the narrow shutter.

later Ford 5.0 distributors are solid, no mechanical or vacuum advance.
Just a simple rotor with PIP gates and a Hall Effect sensor.
The signal should be stable (Without Scatter)

the module is this

the shutter wheel that forms the PIP signal is this


Drag Radial Performance":2jfs4vwl said:
Here's a Picoscope waveform of what Ford TFI ignition signals look like. The blue signal is the PIP sensor inside the distributor, short for Profile Ignition Pickup. This is called the PIP signal, and it's how the distributor tells the ignition module and the PCM when a cylinder is at 10 degrees before Top Dead Center. One out of every 8 pulses is narrower than the other 7 are. This is called Signature PIP, and represents Cylinder #1 is at 10 degrees before TDC.
Once the PCM knows which cylinder is #1, it can fire injector #1 at the correct time. To fire the other 7 injectors, it doesn't need a special cylinder identification. The PCM just counts from 1 to 8 in the firing order - 1-3-7-2-6-5-4-8.
The green signal is called SPOUT, short for SPark OUTput. The computer receives the PIP signal, modifies the timing of this signal to reflect the ignition advance timing it wants the coil to fire at, and sends this modified signal back to the ignition module. The ignition module then fires the coil based on this SPOUT signal.
If the SPOUT signal is not present, the ignition module creates it's own SPOUT signal that is identical to the PIP signal, and fires the coil based on that instead. This is what happens when either the PCM loses communication with the ignition module, or when you unplug the SPOUT connector to set your timing. Unplugging SPOUT literally cuts the wire going from the PCM to the ignition module.
The notches you see in the top of the PIP and SPOUT signals are reflections of the one signal's edge in the other. Presence of these notches indicates the ignition module is receiving a SPOUT signal OK. The TFI ignition system can be standalone. It does not need the PCM in order to fire the coil. It only needs the PCM to alter the timing of the coil firing, to create the proper ignition advance. Without the PCM, the ignition will fire at 10 degrees BTDC every time, if that's where your base timing is set to.
These ignition signal waveforms were captured using a Picoscope 4423 4 channel digital storage oscilloscope. It's basically the world's fastest graphing voltmeter. Each one of these blue PIP signals lasts for about 11.32 milliseconds at an idle speed of 672 RPM. A typical voltmeter will only update about 4 times per second, or once every 250 milliseconds, which is nowhere near fast enough to capture these events.
At 672 RPM, one PIP signal lasts about 11.32 milliseconds, or 11/1,000 of a second. At 6,000 RPM, one PIP signal will last for approximately 1.25 milliseconds, or 1/1,000 of a second. A scope could capture that as if it were in slow motion. This scope can measure signals as fast as 1/2 of one nanosecond. Nothing gets past this scope. If you're at 6,000 RPM and one single PIP signal is missing, causing one cylinder to misfire one time, a scope can catch it in the act, which is why a scope is perfect for diagnostics.
At Drag Radial Performance, we specialize in these classic 5.0L Mustangs. Despite their age, we're moving the hobby forward in technology, picking up where these cars were left off 20 years ago, and applying today's technology in tuning and diagnostics to them. It's a great time to be rolling in a 5.0! 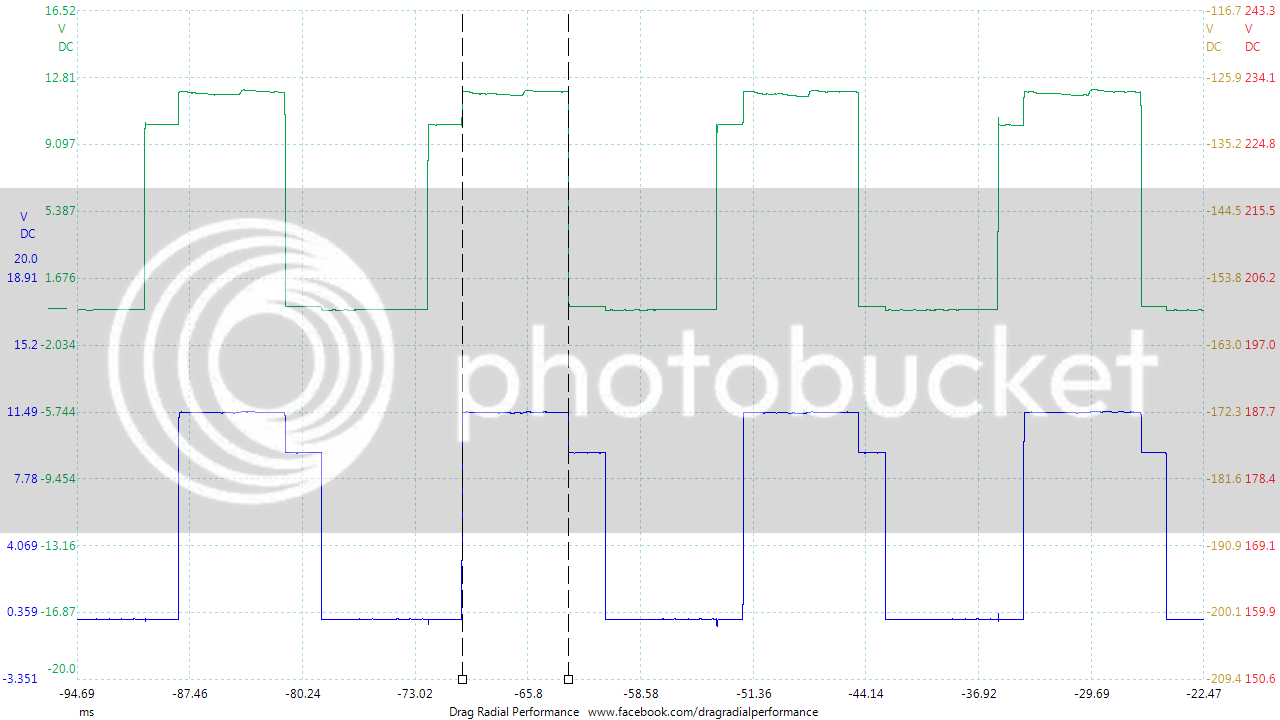 All pretty interesting (as I have been planning to get a 3.8 bent6 waggy at some point.
It's been very difficult locating tho). Close several Xs, but no cigar...
W

VIP
Supporter 2020
Xctasy, absolutely wonderful write up! Can you explain the difference between the black and gray TFI modules?

Wesman07":2nitu9ia said:
Xctasy, absolutely wonderful write up! Can you explain the difference between the black and gray TFI modules?
Click to expand...

Tom Moss":2nitu9ia said:
Most technicians who deal with Ford drivability and no-start problems have become very familiar with the Thick Film Ignition (TFI) system. Ford started using the six-pin TFI module with the EEC-IV computer system in 1983, and for years it remained basically unchanged.

Ignition dwell with the Push Start (gray module) system is controlled by the TFI module alone, and increases with engine rpm. The Ignition Diagnostic Monitor (IDM) signal on a Push Start TFI system comes from the coil negative circuit and is filtered through a 22k ohm resistor to pin #4 on the EEC-IV computer. The computer monitors this circuit to verify a coil firing for each PIP signal, and sets codes if it sees missing or erratic signals. Another feature that is unique to the Push Start TFI system is the start input on pin #4 of the module connector. This is wired into the starter relay trigger circuit, and signals the TFI module that the engine is cranking. When the module sees battery voltage on this circuit, the SPOUT signal is ignored.

In the early '90s, Ford began using a different TFI system on certain vehicles -- the Computer Controlled Dwell (CCD) TFI system. The TFI module on CCD TFI is always black in color. There are a few major differences between the two systems. As the name implies, with the CCD system, the computer controls primary dwell. The CCD TFI module still ungrounds (fires) the coil at the rising edge of the SPOUT signal, but now the falling edge of the SPOUT signal (which had no meaning to the Push Start TFI module) is used by the CCD TFI module to ground the coil. The PIP signal remains the same 50% duty cycle square wave, but SPOUT signal duty cycle varies according to how much dwell is desired by the computer.

Another major difference between the two systems is the IDM circuit. Pin #4 on the CCD TFI module, which was the start circuit input on the Push Start TFI module, is now the IDM signal, sent directly from the TFI module to pin #4 on the EEC-IV computer. This signal is still a filtered (low voltage) version of the ignition primary waveform, but is filtered internally in the TFI module rather than through an external resistor.

There isn't any start circuit input to the CCD TFI module; the module infers engine cranking from a low rpm input from the PIP signal.
Since these two TFI systems are so significantly different, yet so similar in appearance, parts application problems will inevitably occur.

With the incorrect TFI module installed, the vehicle will run, but drivability and MIL (malfunction indicator lamp) problems will result. For instance, if a gray Push Start TFI module is installed in a CCD system, the computer will not be able to control ignition dwell, and the MIL will illuminate with memory codes for the IDM circuit set, as the gray TFI module is incapable of generating an IDM signal to the computer.

If a black CCD TFI module is installed in a Push Start system, dwell will remain fixed, since the SPOUT signal duty cycle never changes. If in doubt about which TFI module belongs on a particular vehicle, consult the ignition system-wiring diagram for the vehicle.

If the wire going to pin #4 on the EEC-IV computer comes directly from pin #4 of the TFI module, it is a CCD system.

If not, it is a Push Start system.